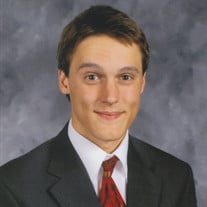 Alexander McGunigle, age 32, passed away on March 13, 2022, in Fresno, California. Alexander was born on August 22, 1989, to Andrew McGunigle and Cynthia McDonald in Fresno, California. He was a lifetime resident of Fresno, where he graduated from Herbert Hoover High School and went to Fresno City College. He met the love of his life and fiancé, Victoria Rocha. Alexander was a loving father, fiancé, son, brother, and friend to many. Alexander worked as a commercial and industrial electrician for the last three years. Alexander had a great passion and obsession for cars and trucks. He was very creative. He played the tenor saxophone. At age 7, he won 1st for his book, A Little Truck, and his work was showcased at the Fresno County Library for three months. Alexander was preceded in death by his father, Andrew McGunigle; and grandfather, Donald Duncan McDonald. Alexander is survived by his mother, Cynthia McDonald McGunigle, his brother, Angus McGunigle; his fiancé, Victoria Rocha; his children, Liam and Aubrey McGunigle; and his grandmother, Pauline McDonald. A graveside service will be held at 11:00 a.m. on Friday, April 8, 2022, at Turlock Memorial Park, 575 N. Soderquist Rd., Turlock. The family asks that donations be made to Alexander’s GoFundMe. Link to GoFundMe: https://gofund.me/c3bf87e1

The family of Alexander McGunigle created this Life Tributes page to make it easy to share your memories.

Send flowers to the McGunigle family.