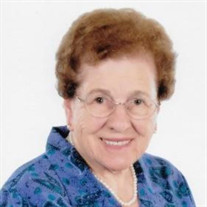 Turlock, California - Alice Marie Nyquist, age 96, a life-long resident of Turlock, CA, went to her eternal home on January 16, 2021. She was born in Turlock, CA to her late parents, Joe and Mary Sousa, both originally from the Azores. Alice was preceded in death by her husband, John Arthur Nyquist, and her siblings, Manuel (Rosina) Souza, Ann (Don) Rae, Bill Souza, Al (Betty) Souza, and a daughter-in-law, Carrie Nyquist. She is survived by her brother, Joe Sousa, her four sons, Larry Nyquist, Richard (Cheryl) Nyquist, John (Patty) Nyquist, Bill (Lucy) Nyquist, and one daughter, Kathleen Nyquist. She is also survived by 8 grandchildren, 3 great-grandchildren, and many nieces and nephews. Alice was a faithful member of Sacred Heart Catholic Church. She met her beloved husband John while working at Hume Cannery after he returned from service in World War II. They married on November 16, 1947. She started working on the line at the cannery, later working in the personnel office after it became Joan of Arc and later Tri Valley Growers. Alice retired from Tri Valley in 1987. She was also a homemaker who will be remembered for her delicious cooking/baking, crocheting, quilting, letter writing, picture taking, and playing games. She loved to be on-the-go. She was a world-traveler who visited 49 states and 13 other countries. Alice was very proud of her Portuguese heritage. Alice was a generous soul, a devoted wife, and a loving mother and grandmother who put the needs of others before herself. She will be greatly missed. A Rosary and Mass will be held at Sacred Heart Catholic Church on February 1, 2021 for the immediate family only. A private graveside service will follow at Turlock Memorial Park. Anyone wishing to make a donation in her name can do so to United Samaritan’s Foundation at www.unitedsamaritans.org/donate or St. Jude Children’s Hospital at www.stjude.org/donate.

Turlock, California - Alice Marie Nyquist, age 96, a life-long resident of Turlock, CA, went to her eternal home on January 16, 2021. She was born in Turlock, CA to her late parents, Joe and Mary Sousa, both originally from the Azores. Alice... View Obituary & Service Information

The family of Alice Marie Nyquist created this Life Tributes page to make it easy to share your memories.

Send flowers to the Nyquist family.