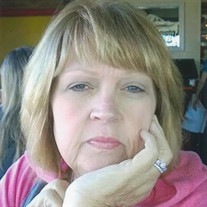 On Monday, May 24, 2021, Barbara MacKay, beloved wife, mother, and sister, passed away at the age of 62 due to complications from dialysis. Barbara was born on June 10, 1958, in Turlock, CA, to Eddie and Melba (Willhite) Taylor. She graduated from Turlock High School in 1976. Shortly after, Barbara married Walter Armas and the pair had two sons, Anthony and Darren. Barbara’s caring and helpful nature enabled her to help others by working for Emanuel Hospital, Dr. Felix Sanchez, and Dr. David Bybee for many years. Barbara married Dean MacKay in 2003. The two embarked on adventures for the next 18 years. Barbara and dean moved to Elk, CA, in 2003. It was in Elk that Barbara fell in love with the Northern California coast. She loved visiting her favorite place on the coast, Fort Bragg. Barbara became involved with Clan MacKay for approximately eight years where she and Dean oversaw many of the Scottish games held on the west coast and Hawaii. Barbara and Dean returned to the Central Valley from 2006 to 2018 before settling in Idaho for the next three years. Barbara loved music, two of her favorite being the Beatles and Runrig. She loved spending time with her family, especially her granddaughters. Barbara was preceded in death by her parents, Eddie Taylor and Melba Victor; her sister, Sandra Taylor; her step-daughter, Shari; and her grandson, Jason. She is survived by her husband, Dean MacKay of Star, ID; her sons, Anthony Armas of Denair and Darren (Tammy) Armas of Middleton, ID; step-children, Jason (Kristen) Harlander, Luke, Deena and Devin; siblings, Eddie “Buddy” (Sandy) Taylor, Danny (Cynthia) Taylor, Tracy (Steve) Talkington, Michelle (Dan) Lino, Cathy (Tim) Chipponeri and Butch (Karley) Jensen; and her grandchildren, Nicole and Natalie Armas, Chase, Kaden, Kaylee, Cheryl, Esme, Elijah and Itsy. A funeral service will be held at 2:00 p.m. on Friday, June 4, 2021, at Turlock Funeral Home, 425 N. Soderquist Rd., Turlock. Following the funeral, Barbara will be laid to rest at Turlock Memorial Park.

On Monday, May 24, 2021, Barbara MacKay, beloved wife, mother, and sister, passed away at the age of 62 due to complications from dialysis. Barbara was born on June 10, 1958, in Turlock, CA, to Eddie and Melba (Willhite) Taylor. She graduated... View Obituary & Service Information

The family of Barbara Lynn MacKay created this Life Tributes page to make it easy to share your memories.

Send flowers to the MacKay family.