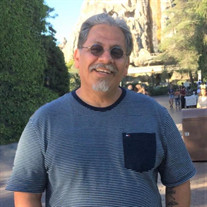 Carlos Cervantes, a resident of Atwater, passed away on Thursday, September 16, 2021. He was 60 years old. Carlos was born in Bakersfield, CA, on August 22, 1961, to Jose Luis D. Cervantes and Maria F. Cervantes. Raised in Livingston, he attended St. Jude Thaddeus Catholic School and Livingston High School, graduating in ’79. He attended some college but ultimately devoted his time to his passions. Carlos was a professional musician for Alma Triste and Los Jimms in the '70s and '80s. He went on to work as a firefighter for Livingston Fire Department before devoting 25 years to working as a commercial truck driver and as an entrepreneur. Carlos married the love of his life, Sylvia Cervantes, on July 16, 1986 in a beautiful ceremony in South Lake Tahoe, CA. They shared 35 beautiful years together before his sudden passing. Kind, generous, and selfless in everything he did, Carlos was involved in many Livingston community events. He also found great joy volunteering for his favorite restaurant, Villa Napoli, and was a Knights of Columbus, 4th degree member. A man of faith, he attended Saint Jude Thaddeus Catholic Church in Livingston and volunteered regularly to help with church events. Carlos will be remembered for his love of playing the drums, traveling, BBQ’ing, working on projects with his wife and mother, his constant love of learning, and most of all, his unwavering devotion to his family. The cherished memory of Carlos will be kept alive by his loving wife, Sylvia Cervantes of Atwater; his children, Savanah Garcia of Livingston, Carlos Cervantes Jr. of Livingston, and Emily Sandoval of Reno, NV; six brothers, three sisters, and six grandchildren. Along with his loving parents, Luis and Maria Cervantes, Carlos was preceded in death by his brother, George Cervantes, and his nephew, Armando Cervantes. He will be dearly missed. A visitation will be held from 4 to 7 p.m. on Thursday, October 14, 2021, at Turlock Funeral Home, 425 N. Soderquist Rd., Turlock. A Rosary, followed by the Funeral Mass, will be held at 10:00 a.m. on Friday, October 15, 2021, at St. Jude Catholic Church, 330 Franci St., Livingston. Following the Mass, Carlos will be laid to rest at Turlock Memorial Park.

Carlos Cervantes, a resident of Atwater, passed away on Thursday, September 16, 2021. He was 60 years old. Carlos was born in Bakersfield, CA, on August 22, 1961, to Jose Luis D. Cervantes and Maria F. Cervantes. Raised in Livingston, he attended... View Obituary & Service Information

The family of Carlos Cervantes created this Life Tributes page to make it easy to share your memories.

Carlos Cervantes, a resident of Atwater, passed away on Thursday,...

Send flowers to the Cervantes family.