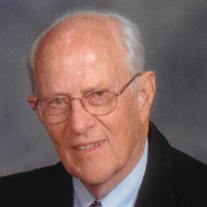 Daniel Olson, a life-long resident of the Turlock area, passed away peacefully on January 30, 2021 at the age of 93. He was the beloved husband of Lorraine (Francine) Olson with whom he shared 72 years of marriage. He was the loving father of three daughters—Dana (Donald) Syverson of Wrentham, MA, Karen (Ken) Rapp of Turlock, and Janet (Micheal) Maxwell of Twain Harte. He was a cherished grandfather to seven grandchildren—Kristi (Robert) Mayfield, Karl (Pam) Rapp, Karina (fiancé Mike Gorshe) Rapp, Kurt (fiancé Sabrina Muttillo) Rapp; Ryan (Sadie) Maxwell, Jared (Ana) Maxwell, Austin Maxwell; and seven great-grandchildren—Jacob, Daniel and Abigail Maxwell; June and Elsie Mayfield; Lena and Liv Rapp. Dan was predeceased by his four siblings—Marjorie Parnell, Miriam (McCrary) Johnson, Raymond Olson and Joanna (Vaughan) Doerkson. Dan was born on December 12, 1927 in Delhi, CA. He attended Delhi Grammar School and graduated from Livingston High School in 1945. His parents, Eric and Hulda (Swanson) Olson, were both children of Swedish immigrants and members of the (Swedish) Beulah Covenant Church of Turlock. Dan and Lorraine were high school sweethearts and married in 1948. Dan was drafted into the US Army and served post-war at Fort Lewis, WA. When he returned home, he got his start in banking as a bookkeeper at Security State Bank, a local Turlock bank. He worked his way up in banking through a series of positions over his 34-year career. When the bank was bought by the Bank of California, Dan was promoted to Branch Manager; it later became American National Bank. In that role he served the financial needs of his customers, building lasting relationships with area farmers, merchants and homeowners, until retiring in 1984. Dan was an active member of the local Kiwanis Club and the Turlock Chamber of Commerce during his business career. The Olson’s lived and raised their three daughters in Turlock. Dan was a member of the Turlock Evangelical Free Church. He lived his Christian faith and filled many roles in the Free Church throughout his lifetime, from choir member to administrative and leadership positions. Dan enjoyed RV travel and road trips with his family. He and Lorraine travelled more extensively throughout the U.S. after retirement, visiting 44 states, National Parks, Washington DC, and far-flung family members. On the farm where Dan was raised, he learned carpentry, woodworking and machine maintenance. As a handyman, Dan was always ready to lend a helping hand to a neighbor or friend. His daughters grew up thinking their dad could do just about anything and were grateful recipients of his skills at their own homes. During his lifetime, Dan made use of his many skills in a number of building projects. He donated almost 2,000 hours to the new construction of the Evangelical Free Church in 1959 at its current location on Johnson Road, now known as Crossroads Church. For 15 years, he volunteered his time to the Free Church construction team. For one week a month, he and Lorraine lived on each site in their RV, along with other volunteers, building sanctuaries and completing other improvement projects for new churches in Northern CA. In 2004 Dan and Lorraine moved to Covenant Living Community in Turlock, where they lived happily together until Lorraine had a stroke in 2018; then they lived apart—he in assisted living and she in skilled nursing. Since the pandemic visitation restrictions began in March, they were unable to see each other for ten months. On January 25, to the joy of their family, Dan and Lorraine were finally reunited for five days before he passed away. The Olson family would like to thank all the members of the Covenant Living staff that cared for Dan so sweetly and tenderly through the end of his life. His family would also like to thank the staff of CovenantCare Hospice for their support and aid to Dan in his final hours. The burial service will be held privately. Please make any donations to CovenantCare Hospice, 125 N. Broadway, Suite 1A, Turlock, CA 95380 or Covenant Living of Turlock, 2125 N. Olive Ave., Turlock, CA 95382.

Daniel Olson, a life-long resident of the Turlock area, passed away peacefully on January 30, 2021 at the age of 93. He was the beloved husband of Lorraine (Francine) Olson with whom he shared 72 years of marriage. He was the loving father... View Obituary & Service Information

The family of Daniel Francis Olson created this Life Tributes page to make it easy to share your memories.

Daniel Olson, a life-long resident of the Turlock area, passed...

Send flowers to the Olson family.