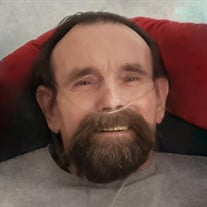 David J. Roberts, Butch, or Dave as his family called him, passed away on April 7, 2021 at the age of 75. His death leaves behind an emptiness among his family and friends that can't be filled. David was born on February 28, 1946 in Detroit, Michigan, to David and Irene Roberts. He was the second oldest of five children. He remained in Michigan until the early 60s where he made his way to California, landing a job with Bekins Moving and Storage in Concord. He was a devoted employee for Bekins for 25 years. It was there he was introduced to his wife, Francisca “Bobbie,” and, within 6 weeks of meeting, they were married on June 22, 1968. After leaving Bekins, David worked for Paul Arpin Van Lines for 15 years. David was a giant, although not big-framed, extremely tall or massive in build. His integrity, generosity, beliefs, work ethic, back bone and grit was our example of a man. He was a provider, stern and kind, with unsurmountable unselfishness for his family and those he cared for. David Roberts Jr. was a giant....from the inside out. The kind of giant that we can only hope to be. David and Bobbie raised three children, were blessed with seven grandchildren and six great-grandchildren. He and Bobbie enjoyed traveling the country together and making lasting memories. He loved to gamble and enjoyed the peace and quiet of nature, but mostly he adored spending time with his family. David was a thoughtful, caring, loving, genuine husband, father, brother and Papa. He leaves behind his brothers, Lawrence Roberts (Jeanette) and Kenneth Roberts (Susan); children, Sophia Roberts, David Roberts (Jeannie) and Dawn Roberts (Bo); grandchildren, Teia Watson, Joseph Roberts, Mikaela Roberts, Travis Quesada, Nathan Quesada, Andrew Kliene and Philip Haigh; and great-grandchildren, along with many nieces, nephews, sisters and brothers-in-law. David was preceded in death by his parents, David and Irene Roberts; sisters, Beverly and Karen; and his loving wife, Francisca “Bobbie” Roberts. The Roberts family would like to give a special thank you to Bristol Hospice of Merced, especially Amanda, Martha, Kym and Chaplain Randy. A Celebration of Life will be held at 1:30 p.m. on Saturday, May 1, 2021 at the home of Dawn and Bo. A private burial will be held on Monday, May 3, 2021, at Turlock Memorial Park. He will be laid to rest with his loving wife. To send a floral arrangement in David's honor, the family kindly asks that you use A Blooming Affair Floral & Gifts in Merced, 463 W. Main St., Merced, CA 95340. To place an order, please contact them at 209-723-9456.

David J. Roberts, Butch, or Dave as his family called him, passed away on April 7, 2021 at the age of 75. His death leaves behind an emptiness among his family and friends that can't be filled. David was born on February 28, 1946 in Detroit,... View Obituary & Service Information

The family of David J. Roberts "Butch" created this Life Tributes page to make it easy to share your memories.

David J. Roberts, Butch, or Dave as his family called him, passed...