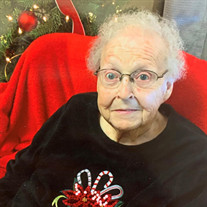 Dorothy Ruth Hurley McBeth Nelson was born on June 4, 1919 in Ohiowa, Nebraska, the only child of James and Addie Hurley. She graduated from Geneva High School, where she was class president and active in many clubs. She attended Wesleyan University, where she majored in Business Administration and Business Law. On November 12, 1939, she married her high school sweetheart, Harold McBeth. They lived in California until 1946, when they moved to Idaho Falls, Idaho. There they were active in the Methodist Church and Eastern Star, where she served as Worthy Matron and Grand Chaplain for the State of Idaho, while Dorothy was working as an office manager. In 1978 they made their home in Ceres, California, until Harold’s death in 1983. On March 17, 1984, she married Donald L. Nelson, a retired Air Force Major. In doing so, she gained a stepson, with whom she formed a wonderful bond. Major Nelson passed away in 1994, and Dorothy maintained her own residence until November of 2015. In her earlier years, Dorothy enjoyed fishing, golfing, playing bridge, her rose garden, her dogs, Peppe and Buttons, and many church and civic activities. She was an ardent sports fan, following her favorite teams: the University of Nebraska and the SF Giants. She maintained friendships from high school, college and relatives by calling or writing. Throughout her life, she kept a positive attitude and made friends with those who crossed her path. Dorothy was a member of Harvest Presbyterian Church in Ceres, California, where she formed close friendships with Pastor Jim Stochl and church member, Linda Sherman. For the last two years, she has resided at Bethel Assisted Living, where she enjoyed playing Bingo, word games and jigsaw puzzles. She and the staff had a loving, caring relationship. Dorothy passed away on March 13, 2021, less than three months away from her 102nd birthday. She had a long and active life, maintaining her sweet spirit and love of the Lord to the end. Dorothy is survived by her stepson, Donald Nelson and his wife, Jayne of Dundee, Oregon, as well as cousins, other family members and friends. A graveside service for Dorothy will be held at 12 noon on Monday, March 22, 2021, at Turlock Memorial Park, 575 N. Soderquist Rd., Turlock, California.

Dorothy Ruth Hurley McBeth Nelson was born on June 4, 1919 in Ohiowa, Nebraska, the only child of James and Addie Hurley. She graduated from Geneva High School, where she was class president and active in many clubs. She attended Wesleyan University,... View Obituary & Service Information

The family of Dorothy Ruth Nelson created this Life Tributes page to make it easy to share your memories.

Send flowers to the Nelson family.