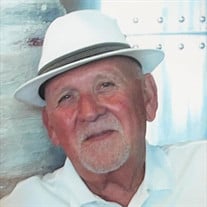 Douglas Norman Lewis was born on October 30, 1940 to parents, Norman and Mary Lewis in Turlock, CA. Doug was raised on the family ranch on Linwood Avenue, where his family farmed alfalfa, eggplant, and onion. He attended Hawthorne Elementary School, Wakefield Jr High, and went on to graduate from Turlock High School in 1958. After high school Doug enlisted in the Navy. When Doug got back to the states from the Navy, he attended Fresno City College. He then worked in the wine industry but realized it wasn’t his desired path and decided to enroll in barber school. He opened a shop in San Jose, eventually returning to Turlock to open a one chair shop on Crane Avenue, naming it, “The Cutting Room.” In 1981 Doug and Diana Stanton began dating, and in 1982 they married. In 1986 they welcomed Ryan Douglas into the world and in 1990 Toni followed. Doug retired in 2015 and he and Diana began expanding their travels. Doug was a member of Sacred Heart Church in Turlock. He also served on the Arrowhead Club Board and belonged to Turlock Golf and Country Club for 37 years. Doug loved all things sports. You could always guarantee there was some type of game on the TV. He was a devoted San Francisco 49ers fan and was so excited when Ryan became old enough to go to the games with him. He enjoyed a good party and was always a hit on the dance floor. Doug had moves and loved to dance the jitterbug. Doug passed away on April 12, 2021 after battling with COPD for 8 years. Doug is survived by his wife Diana Lewis; son Ryan (Ashley) Lewis; daughter Toni Lewis; grandson Noah Lewis; nephew Jeffrey Cies; siblings Barbara Ochoa, JoAnne Carlucci and Dan Lewis; and many nieces, nephews, great-nieces and great-nephews. Doug was preceded in death by his parents, Norman and Mary Lewis and brother, James “Jimmy” Lewis. Doug will be deeply missed and always remembered for his charming smile, sense of humor, and his love for his family and many friends. A Rosary will be held on Saturday, April 24, 2021, at 11:00 a.m., with a Celebration of Life immediately following, at Turlock Funeral Home, 425 N. Soderquist Rd., Turlock, CA 95380.Following the funeral service, Doug will be laid to rest at Turlock Memorial Park. In addition, a reception will be held after the interment on Turlock Funeral Home's North Lawn. In lieu of flowers, please make donations online to Stanford Health Care at makeagift.stanford.edu, in support of The Pulmonary & Critical Care Medicine General Gift Fund; or to Sacred Heart Catholic Church, 1301 Cooper Ave., Turlock, CA 95380.

Douglas Norman Lewis was born on October 30, 1940 to parents, Norman and Mary Lewis in Turlock, CA. Doug was raised on the family ranch on Linwood Avenue, where his family farmed alfalfa, eggplant, and onion. He attended Hawthorne Elementary... View Obituary & Service Information

The family of Douglas "Doug" Lewis created this Life Tributes page to make it easy to share your memories.

Send flowers to the Lewis family.