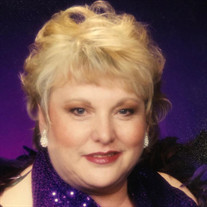 Evona Stonebarger passed away on Tuesday, February 16, 2021 at her home in Manteca, CA from brain tumor related complications. She is survived by her husband, Francis Stonebarger; Brother Jerry Ladd and wife Nelsie; Brother Vernon Ladd and wife Nita; Daughter Jill Mojica and husband Mark; Son Kevin Young and wife Kim; Son Todd Young and wife Linda; and Stepchildren Glenda, Greg, Danny and Kevin. Grandchildren Anthony Mojica, Tayler Young, Jonathan Young, Kristina Mojica, and Maryana Young. Evona was born in Richmond, CA on February 18, 1949. She grew up in San Pablo, CA, before moving to Fresno, CA, where she attended high school at West Coast Bible School. She graduated from West Coast Bible School in 1967. After graduation, she met her first husband, James Young, while he was stationed at the Air Force Base in California. They were married for 26 years. Over the years, Evona spent her time raising her 3 children and assisting her husband in the ministry. She loved working with the children’s church and helped to grow that ministry. She later helped open a Christian School along with her first husband. As her children became adults, Evona and her first husband divorced. Evona began a new career path with Mary Kay Cosmetics where she became a Director of a unit. During this time, she met Francis Stonebarger and they were married in 2004. Evona enjoyed many things in life. Most of all, she enjoyed being with her husband and their families. She adored going shopping with her daughter and granddaughter. She also loved playing cards, especially Nertz, and travelling. Her last trip was a 15 day cruise to Hawaii. Evona wanted everyone to celebrate her life. She’s now in a better place with no more pain. She was faithful in her belief of God and is now in Heaven, reunited with her loving parents. A graveside service will be held at 2:00 p.m., on Friday, March 5, 2021, at Turlock Memorial Park, 575 N. Soderquist Rd., Turlock, CA. Arrow signs will mark the way to the site. Immediately following the service, the family is hosting a reception (address is available from family).

Evona Stonebarger passed away on Tuesday, February 16, 2021 at her home in Manteca, CA from brain tumor related complications. She is survived by her husband, Francis Stonebarger; Brother Jerry Ladd and wife Nelsie; Brother Vernon Ladd and... View Obituary & Service Information

The family of Evona Stonebarger created this Life Tributes page to make it easy to share your memories.

Send flowers to the Stonebarger family.