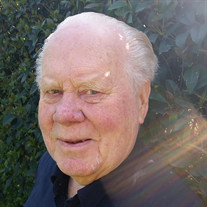 Frederick O. Hawkinson September 12, 1931 – October 9, 2021 A Life Well-Lived, and a Man Well-Loved Fred O. Hawkinson was born to Grace and Oscar Hawkinson in San Jose, California in 1931, and grew up in Campbell. Swedish was his first language, thanks to the presence of his great-grandfather and grandparents in his multi-generational home. Fred and his two brothers, Paul and Henry, were raised to love God, and the family faithfully attended Covenant and Baptist churches. Fred served the Lord in the church his entire life. After his 1949 graduation from Campbell High School, Fred earned a Bachelor’s Degree in History from San Jose State University. He remained a lifelong San Jose State Spartan fan, attending football games for decades with his family and friends. Having enrolled via the Marines ROTC program, Fred went on to serve in the US Marine Corps, achieving the rank of Major. He embodied the Marine motto of Semper Fidelis (Always Faithful), as he lived a life that was faithful to God, his family, his friends, and his promises. Fred married the love of his life, Dorothy Claes, in 1954. Together, he and Dorothy created a warm, loving, and fun home for their four children. They were very proud of the beautiful replica early American house they built in Mount Hermon, a Christian conference center in the Santa Cruz Mountains, where the family spent summers. For 35 years, Fred taught US history to junior high students in the Cupertino School district. He was a gifted teacher and was beloved by his students. During retirement years, Fred and Dorothy found much joy in nurturing their grandchildren, to whom Fred remained devoted after his beloved Dorothy went to be with the Lord in 2007. In his final years, Fred moved to Covenant Living of Turlock, where he joined some old friends and made many new ones. He was popular with his neighbors, who were drawn to his kindness, gentleness, and the mischievous twinkle in his eye. Happy and content to the end, Fred was at peace and ready for heaven when the Lord called him home. Fred is survived by many who loved him, including his children, David (Terrie) Hawkinson, Karla Hawkinson, James (Jeanny) Hawkinson, and Carol (Dolly) Custer; his grandchildren, Andrew, Caroline, Melanie, Charlotte, Max, Alex, Eliyanah, and Elishiah; his brothers, Paul Hawkinson and Henry (Libba) Hawkinson; as well as many nieces, nephews, grand-nieces and grand-nephews, and friends. A graveside service will be held at 2:00 p.m. on Friday, October 22, 2021, at Turlock Memorial Park, 575 N. Soderquist Rd., Turlock. If you’d like to make a donation in Fred’s memory, please consider Mount Hermon’s Campership Fund (mounthermon.org).

Frederick O. Hawkinson September 12, 1931 &#8211; October 9, 2021 A Life Well-Lived, and a Man Well-Loved Fred O. Hawkinson was born to Grace and Oscar Hawkinson in San Jose, California in 1931, and grew up in Campbell. Swedish was his first... View Obituary & Service Information

The family of Frederick O. Hawkinson created this Life Tributes page to make it easy to share your memories.

Send flowers to the Hawkinson family.