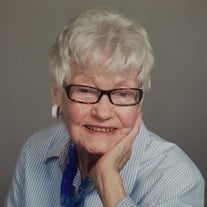 Gloria A. Johnson was born May 6, 1924 in Turlock, California, to Oscar and Anna Johnson. She attended local schools and graduated from Turlock High School. During high school she worked as an usherette at the Fox Theater alongside her two older sisters. She studied pre-nursing at Modesto Junior College and graduated with her A.A. degree in 1945. Her career plan was to become a nurse, but during a semester break from school she went to work at the Turlock Post Office and her “temporary” job lasted 9 years. After those 9 years, Gloria took a 3-month leave of absence from her job to travel to Sweden with her parents. In Sweden she met many cousins and extended family members, and she was able to visit both her mother and her father’s hometowns. When she got back to the United States she bought a brand new car, a Pontiac, in Baltimore and drove it cross country back to California with her parents, stopping at Mt. Rushmore and Yellowstone National Park along the way. In her later years she still told wonderful stories about this trip, and it is likely what sparked her love of travel and family history. Once back in California, Gloria resigned from the Post Office and went to work at Retailer’s Credit Association also known as the Credit Bureau of Modesto. She worked there over 40 years until her retirement. While at the Credit Bureau, she was very active in business clubs including Credit Women International where she held several offices. She enjoyed serving in leadership roles and attending conventions. She always said that her co-workers at the Credit Bureau became her good, life-long friends. Gloria enjoyed the arts and loved attending shows and musicals. She went on many trips throughout California as part of the MJC travel program. She was also the keeper of family history and photographs. Nieces and great-nieces loved looking through her many photo albums and hearing stories about grandparents, great-grandparents, and great-greats. She was a wonderful storyteller with a great sense of humor and a spunky personality that kept her going through the ups and downs of a long, full life. Gloria was preceded in death by her parents; her sisters, Thelma, Violet, and Earline; her brothers, Oscar and Verner; her nephew, Michael, and most recently her sister-in-law Paulina. She is survived by many loving nieces and nephews, great-nieces and great-nephews, and her dear long-time friend, Marjorie Swartz, and Marjorie’s son, Stuart. Gloria was a member of St. Peter Lutheran Church in Modesto where she was confirmed as an adult. Her funeral service will be held on Friday, April 1, 2022 at 10:30 a.m. at St. Peter Lutheran Church, 3461 Merle Avenue in Modesto. She will be laid to rest in a private burial at Turlock Memorial Park near her parents and siblings. Donations in her memory can be made to Shriners Hospitals for Children and The Salvation Army.

Gloria A. Johnson was born May 6, 1924 in Turlock, California, to Oscar and Anna Johnson. She attended local schools and graduated from Turlock High School. During high school she worked as an usherette at the Fox Theater alongside her two... View Obituary & Service Information

The family of Gloria Johnson created this Life Tributes page to make it easy to share your memories.

Send flowers to the Johnson family.