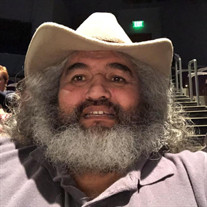 Guadalupe “Lupe” Villarreal Jr. Retired Farmer, Influencer and Grandfather of many. Guadalupe was born September 13, 1954 to Guadalupe and Leonor Villarreal in Edinburg, Texas. He was an enthusiastic supporter of his community, including Gratton School, Hughson Youth Football, Hughson High School and Denair Gaslight Theater. He was a member of St. Anthony’s Parish and a 4th Degree member of the Knights of Columbus. He was a member of many farming organizations, including the Peach Growers Association and the California Almond Growers. He was the co-founder of Los Pistoleros Resist Chapter, along with his cousin Robert Villarreal. Lupe passed away on March 31, 2021 leaving behind his beloved wife Ruth; their four sons, Sontino (Randee), Anthony (Michelle), Mario (Sara “Nikki”) and Vito (Harry); their grandchildren: Gavin, Aaron, Isabella, Scarlett, Lex, Morgan, AJ, Faith, Eric and Zoey; sister, Sonia (Lynn) Hill; brother, Gus (Pamela) Villarreal; his mother Leonor Villarreal; and many nieces and nephews. He was preceded in death by his father Guadalupe Villarreal Sr. Lupe was the king of selfies; he always had a smile on his face. He had a special passion for life and a love for all. All who knew him will feel his loss deeply. A Rosary will be held at 6:00 p.m., followed by the Celebration of Lupe at 6:30 p.m., on Thursday, April 29th at Turlock Funeral Home, 425 N. Soderquist Rd., Turlock. The Mass will be held at 10:00 a.m. on Friday, April 30th at St. Anthony's Catholic Church, 7820 Fox Rd., Hughson, followed by the burial at Lakewood Memorial Park, 900 Santa Fe Ave., Hughson. In lieu of flowers, donations may be made to Hughson High School for the Lupe Villarreal Memorial Scholarship. Attention: Denise Scott.

Guadalupe &#8220;Lupe&#8221; Villarreal Jr. Retired Farmer, Influencer and Grandfather of many. Guadalupe was born September 13, 1954 to Guadalupe and Leonor Villarreal in Edinburg, Texas. He was an enthusiastic supporter of his community,... View Obituary & Service Information

The family of Guadalupe Villarreal created this Life Tributes page to make it easy to share your memories.

Send flowers to the Villarreal family.