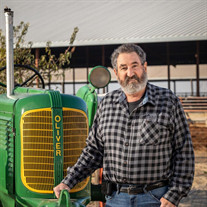 James “Jim” Carvalho was born on February 8, 1951 to proud parents, Joe and Adeline Carvalho, in Turlock, CA. He was the youngest in the family and had two older brothers, John and Joe Carvalho. Jim was raised with his siblings on the family dairy farm in Crows Landing, CA. He learned the family business at a young age and developed a love for agriculture. Jim attended the local Mountain View Elementary and Junior High School. He went on to graduate from Turlock High School in 1969 and attended Modesto Junior College. Jim enlisted in the National Guard and served from 1970-1976. Jim married the love of his life, Fran Drake, on October 26, 1974 in Fremont, CA. He continued to work and dairy at his family’s farm and later bought the business with Fran. After they were married, they moved to Crows Landing and lived on his family’s dairy farm where they started their own family. They welcomed their son Michael, and two years later their daughter Melissa followed. Jim was a dairy and almond farmer throughout his entire career in agriculture. His business grew over the years as he was blessed to be able to work alongside his wife, Fran and son, Michael. Family was always very important to Jim as he loved taking trips with Fran to visit all of his cousins and extended family over the years. In February 2012, his first granddaughter Mallory was born and in September 2014, his second granddaughter Audrey joined the family. He was a doting grandfather and never missed a sports game, dance recital, or school performance. Jim loved camping with family and friends, going to car shows in his 1965 Pontiac GTO, hanging out with the “Mountain View” crew at Pismo Beach - where he was the “Music Man” - and dancing the night away anywhere there was music and fun to be had! He also enjoyed going to concerts, traveling and shooting a game or two of pool in his basement. He belonged to the Westside Auto Club, Telco Bowling League, PFSA, Turlock Pentecost Association past president, Our Lady of Miracles and Sacred Heart Church. Jim was an active community member and was always there to help a neighbor or friend. Jim passed away on April 2, 2021 at his residence after being diagnosed with lung cancer in October. Jim is survived by his wife, Fran Carvalho; son Michael (Alison) Carvalho; daughter Melissa (Nathan) Carvalho-Ubl; his brothers John (Nancy) Carvalho and Joe E. Carvalho; and grandchildren Mallory and Audrey Carvalho. He is also being mourned by many nephews, great-nephews, nieces, great-nieces, great-great niece, brothers- in-law, sisters- in-law, aunt, uncles and cousins. Jim was preceded in death by his parents Joe and Adeline Carvalho and nephew Andy Carvalho. Jim will be missed and never forgotten. He was a wonderful man who loved life and his family. Our love for him will live on in our memories and be carried on through our shared stories. A visitation will be held from 5:00 p.m. to 7:00 p.m., with the Rosary at 6:30 p.m., on Monday, April 12, 2021, at Turlock Funeral Home, 425 N. Soderquist Rd., Turlock, CA 95380. Funeral Mass will be held at 1:00 p.m. on Tuesday, April 13, 2021, at Holy Rosary Church, 8471 Cypress St., Hilmar, CA 95324. Interment will follow at Turlock Memorial Park, 575 N. Soderquist Rd., Turlock, CA 95380. In lieu of flowers, please consider donating to the Jim Carvalho Scholarship Fund for agriculture students at Chase bank.

James &#8220;Jim&#8221; Carvalho was born on February 8, 1951 to proud parents, Joe and Adeline Carvalho, in Turlock, CA. He was the youngest in the family and had two older brothers, John and Joe Carvalho. Jim was raised with his siblings on... View Obituary & Service Information

The family of James Carvalho created this Life Tributes page to make it easy to share your memories.

Send flowers to the Carvalho family.