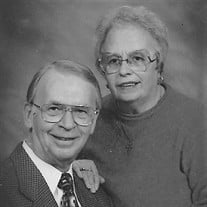 Jean Haas, age 87, passed away on December 15, 2021, in Stockton, CA. Jean was born in Jersey City, New Jersey, on October 5, 1934, to Frank and Theresa Bonito. Jean lived in Jersey City, where she graduated from William L. Dickinson High School. After Jean graduated, she studied administrative work and was employed at Western Electric in Newark, NJ, where she met and married William (Bill) Haas. Jean and Bill lived in Jersey City, NJ, until Western Electric transferred Bill to California in 1962. At that time, they had two children. Bill and Jean lived in Fremont, and two children were soon added to the family. Jean stayed home to raise her children and manage her household. In addition to her demanding role as a mother to four active children, Jean found time to volunteer to help others. She was a Pink Lady at Washington Hospital in Fremont for many years assisting nursing and doctor staff. She volunteered at her children's school, providing any assistance needed. As her Catholic faith was fundamental to her, Jean became a CCD teacher for Holy Spirit Church, teaching catechism to many children over the years. Jean was very friendly and spent many happy hours visiting with what had become life-long friends. As the kids grew, Jean worked full-time at American Business Service. Upon Bill's retirement in 1999, Jean and Bill moved to Turlock. Jean was a loving and devoted wife and mother. Jean loved to sew, making many outfits for her children and grandchildren. She loved to bowl and spent many years in a couple of bowling leagues. Jean was an avid reader and had a wonderful sense of humor- she loved to laugh. Jean joined a group of friends for bible study who became a significant sense of comfort when Bill passed away. Jean is survived by her children, Frank (Debbie) Haas, Annamarie Gilbert (Roger Gellert), John (Lisa) Haas, and Michael (Sonia) Haas, eleven grandchildren, and five great-grandchildren. Jean was loved and will be greatly missed. A funeral Mass will be held at 10:00 a.m., on Monday, March 7, at All Saints Catholic Church, 4040 McKenna Dr., Turlock. Interment will follow at Turlock Memorial Park, 575 N. Soderquist Rd., Turlock.

The family of Jean Bonito Haas created this Life Tributes page to make it easy to share your memories.

Send flowers to the Haas family.