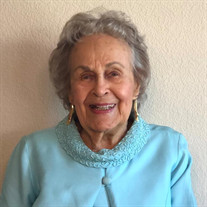 Jean Sunny Johnson Wright, born April 7, 1926 in Fargo, North Dakota, passed away at the age of 95 at home in Turlock, California on April 10, 2021. She was surrounded by her family, daughter Sunne Wright McPeak, son-in-law John Gordon McPeak, and adopted son Eddward Souza. Her parents were Emma Louise Sunne Johnson and Walter Lawrence Johnson. She was the granddaughter of Andrew and Johanna Sunne who immigrated from Norway in 1884 and settled in the Sheyenne Valley near Fort Ransom, North Dakota. Her parents moved to Vallejo in 1937. Jean graduated from Vallejo High School in 1943 and worked at Mare Island Naval Shipyard as a secretary. She married Alfred (Bobo) Paul Wright on March 10, 1946 after he returned from serving in the Army Air Corps, where he was stationed in England flying missions over Germany during World War II. She stood by Bobo when he was awarded the Distinguished Flying Cross in 1992 at Castle Air Force Base by Major General Daniel Helix. Jean and Bobo lived in rural Livingston for 46 years until moving to Turlock in 1992. To help augment the farm income, Jean worked as a secretary for Merced County Justice Court and Livingston Union School District until she retired in 1986, and then assisted Bobo in a trucking logistics firm. She also was the bookkeeper for Cortez Trucking Company (1962-1966) owned by Bobo and Buichi Kajiwara. She was awarded an honorary degree from Solano Community College in 2015 for valuing higher education (but never having the opportunity to go to college herself). Jean was a Loving Mother first and foremost who did everything possible within her means to nurture and support her children. When her son, Donald Paul, was diagnosed with multiple sclerosis in 1977 she wrote to medical researchers and public officials throughout the country trying to find help. She cared for Don at home during the last 12 years of his life, with the assistance of Eddward and Peggy Ford. After Bobo died in 1992, Jean also looked after her mother-in-law, Edie, until she passed away in 1995. Jean was loved by grandsons Scott Gordon Wright McPeak and Todd Brandon Wright McPeak and his family, granddaughter-in-law Ashley and great-grandsons Eliott, Owen, William, and Alexander. She also is survived by: step-brother Robert F. Johnson and Penny Eamer; sister-in-law Ruth Wright (Nikole and Jaime, Greyson); 4 Sunne first cousins (Helen, Avis, Jan, Naomi); cousins-by-marriage in the Deane (Andy and Debbie, Eloise, George and JoAnn), Fentem (Glady and Mike), McKnight (Mollie, Gail and Jim, Stanley; Lenny, Faye, Julie, Bobbie), and Larson Families and their children and grandchildren; and adopted son-in-law Marlon Azevedo. When Jean moved into her new home on Sai Lane in 1994, she was fortunate to have very kind neighbors Jackie and Rich Lane, Phil and Alberta Corzine, and Anita Hernandez. She joined the Red Hats Club and thoroughly enjoyed visiting with those friends and attending luncheons with her cousin Dorie Fretwell. She was comforted by several Fur Babies now resting in peace at the Franklin Pet Cemetery cared for by friends Linda Tiller and Nancy Justin. Jean was laid to rest at Turlock Memorial Park, 575 N. Soderquist Rd., Turlock. Memorial Donations may be made to: Kennedy-King Memorial College Scholarship Fund, P.O. Box 2643, Martinez, California 94553.

The family of Jean S. Wright created this Life Tributes page to make it easy to share your memories.

Send flowers to the Wright family.