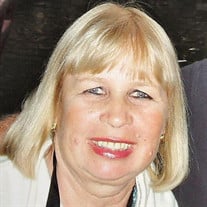 Joan Kappmeier, age 74, passed away on March 19th, 2022, in Hughson, California. Joan was born in Long Island, New York, on August 30, 1947, to John Kaminski and Pauline Roberts. Joan grew up in Middlesex, New Jersey, where she graduated from... View Obituary & Service Information

The family of Joan Kappmeier created this Life Tributes page to make it easy to share your memories.

Send flowers to the Kappmeier family.