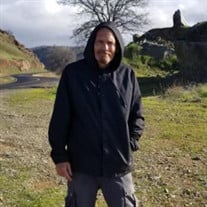 John was born to Richard and Beverly Bartle on November 26, 1967 in Turlock, California. He always considered Turlock his home. At an early age, John learned from his Grandpa Delaware to love working in the yard. He absolutely loved his many redwood trees and his large yards. This is where he felt most at peace. As a child, he often rode along with his dad in his truck, he took many naps on the passenger floorboard. Later in life, He loved driving his own diesel that he named “Lucas” and all the places he was able to see. John enjoyed being a part of the Ameritrek, LLC family and all the locations he delivered to & picked up from. He always looked forward to coming home to his family and his beloved dogs; Shadow, Molly and Pretty Girl. One day in 1990, John met the love of his life, Tracy, and they were married on February 14, 1996. They had two beautiful daughters, Savannah & Rocklin, along with many pets. John had many challenges & obstacles that manifested in his path. He spent the rest of his life making up for this lost time with his family. John spent the last several years fighting his most difficult battle, Diffuse Large B-Cell Lymphoma, which he fought very bravely. During this time, he developed a very fond love for Tillamook vanilla ice cream, Fat Boy sandwiches topped with chocolate magic shell, Milo Sweet Tea and Jarritos. His absolute favorites were Nutcher Banana Milk and Velveeta “Liquid Gold” mac-n-cheese! Music was an important part of his world. It gave him comfort & a sense of peace. John had a heart and soul of gold. He never had unkind words for anyone. He thought nothing of giving a stranger food or money to someone in need. He treated everyone with respect. John forfeited his treatments and continued to work in order to support his family - dedication beyond any comprehension; it’s just the kind of man he was. John was preceded in death by his mother, Beverly Bennett; brother, Kevin Bartle; and his grandparents, Delaware and Billie Goldsmith, Dewey Richard Bartle, and Lucille Isabel Bartle Andrew. He leaves behind his parents, Richard (Barbara) Bartle; step-father, Randy Bennett; his wife, Tracy Bartle; his sister, Rebekah Star Bartle; and his daughters, Savannah Starr Bartle and Rocklin Scarlett Bartle. John was a hero to many people, some who never even knew his name. He will be missed by his family and everyone he hadn’t had the opportunity to meet yet.

John was born to Richard and Beverly Bartle on November 26, 1967 in Turlock, California. He always considered Turlock his home. At an early age, John learned from his Grandpa Delaware to love working in the yard. He absolutely loved his many... View Obituary & Service Information

The family of John R. Bartle created this Life Tributes page to make it easy to share your memories.

Send flowers to the Bartle family.