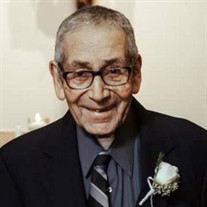 Jose Cruz Maldonado, our most beloved father, grandfather, great-grandfather and great-great-grandfather, was called home to Heaven on August 20, 2021. He was 93 years old. Jose was born on May 2, 1928 in Calletano, Zacatecas in Mexico. In Jerez, Zacatecas, he met his true love, Hijinia Rodarte (Maldonado), in 1946 and married her on February 5, 1947. At a young age, he worked under the Bracero program working seasonal work and going back to his family whenever he could. He did this for many years. Knowing he desired a better life for his large family, he made the decision to immigrate to the United States with his wife and 12 children. In trying to do so, he was led to believe by the consulate that immigrating a family of that size was next to impossible. Jose, being a determined man, refused to let that stop him! He was given an ultimatum that seemed impossible. However, due to his hard work and tenacious spirit, he achieved the unachievable. Between he and his wife, they defied the odds and were able to move to the Central Valley in 1966. In 1967 they purchased a ranchette in Turlock, CA, where they had two more children. With his experience in agriculture, he worked as a foreman managing several farms. Every year he was sought after by farmers because of his farming knowledge and understanding. Jose was well known for his hard work and desire to pass that trait along to his 11 boys and 3 girls. He loved to be festive whenever the opportunity arose. He absolutely loved dancing to Tamborazo music, which he enjoyed so much! He continued to dance until he was 91 years old. Throughout the years he continued to raise his livestock and keep his ranchette thriving. He could charm anyone with his witty humor and ability to make all those around him feel welcome! Knowing he and his bride are reunited brings the family a sense of joy and peace. His legacy will truly live on through all who knew and loved him. Jose Cruz was preceded in death by his wife, Hijinia Maldonado; his two grandsons, Jonathan Christopher Sanchez and Corbin Alexander Maldonado; and his daughter-in-law, Catalina Maldonado. He is survived by his 14 children, Leocadio, Rodrigo, Felipe, Joaquin, Domitilo, Apolinar (Nino), Natalie Sanchez, Antolin, Vincente, Luisa M. Maldonado, Esther Soltero, Audouriel (Douriel), Jose Luis and Saul Maldonado. He has ten beautiful daughter-in-law’s, two son-in-law’s, eighty-one grandchildren, seventy-three great-grandchildren and two great-great-grandchildren. He will be dearly missed by his entire family, his friends and all who knew him. He is a legend! A visitations will be held from 4 to 6 p.m. on Monday, August 30, 2021, with the Recitation of the Rosary at 6 p.m., at Turlock Funeral Home, 425 N. Soderquist Rd., Turlock. A funeral Mass will be held at 10 a.m. on Tuesday, August 31, 2021, at Sacred Heart Catholic Church, 1200 Lyons Ave., Turlock. Following the funeral, Jose will be laid to rest at Turlock Memorial Park.

Jose Cruz Maldonado, our most beloved father, grandfather, great-grandfather and great-great-grandfather, was called home to Heaven on August 20, 2021. He was 93 years old. Jose was born on May 2, 1928 in Calletano, Zacatecas in Mexico. In... View Obituary & Service Information

The family of Jose Cruz Maldonado created this Life Tributes page to make it easy to share your memories.

Send flowers to the Maldonado family.