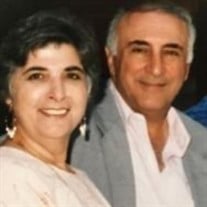 Joseph Yonan passed away peacefully on June 20, 2021 at 89 years of age. The Lord remembered him as he died peacefully without pain. He will be deeply missed by all who loved him, and is now with Shirley, his beloved wife of 52 years. Joey's life was blessed with a career he loved, his family, and many enduring friendships. Joey was born in Chicago where his parents had settled after coming to America through Ellis Island in 1927. After many years in Chicago, the family moved to Turlock. Upon graduating from Turlock High School, Joey enlisted in the United States Air Force to fulfill his dream of becoming a pilot. After his years of service to his country Joey followed that passion, becoming a commercial airline pilot, retiring at the age of 60 as a captain. During his flying years Joey and Shirley relocated to Saratoga as Joey was based out of San Francisco Airport. They enjoyed many trips all around the world during Joey's flying career. After retirement he and Shirley moved back to Turlock where they both had grown up. Joey so loved flying his twin engine Beechcraft Bonanza airplane, and spent hours of enjoyment working on it! Joey and Shirley spent many happy times during those retirement years in Turlock as well as at North Shore Lake Tahoe and Maui, Hawaii, two of their favorite places. Joey leaves behind his nieces Vicky Warda Potthoff, Vivian Joseph Pipkin, Lori Joseph Blanco, and their families, and his first cousin Albert Miroo. Joey also leaves many other nieces and nephews, great nieces and nephews, close relatives and lifelong friends all of whom he loved dearly. He was preceded in death by his loving wife Shirley, parents John and Shmonie Yonan, sisters Grace Warda and Victoria Nevels, and first cousin Mary Bookie. A funeral service will be held on Tuesday, June 29th at 10:00 am at the Assyrian Church of the East (Joey's parents being part of those that built this church in the late 1940s) 830 East Canal Drive, Turlock. Interment will follow the church service at Turlock Memorial Park, 575 N. Soderquist Road, Turlock. There will be a luncheon at the church after the interment hosted by the Ladies of Mar Addai Parish.

Joseph Yonan passed away peacefully on June 20, 2021 at 89 years of age. The Lord remembered him as he died peacefully without pain. He will be deeply missed by all who loved him, and is now with Shirley, his beloved wife of 52 years. Joey's... View Obituary & Service Information

The family of Joseph Yonan created this Life Tributes page to make it easy to share your memories.

Send flowers to the Yonan family.