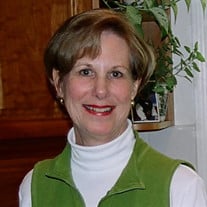 Judy Stammerjohan, 78, died peacefully at Alexander Cohen Hospice House in Hughson on April 24th. She had suffered a massive stroke ten days earlier and there was no hope of recovery. She had three previous, less serious strokes that had already taken their cumulative toll. Judy was born in Santa Barbara in 1942 to her wonderful parents, Charles and Marjorie Karl and had two younger sisters, Barbara and Kathryn. At age 14, her family moved to Menlo Park and later to Los Altos where she graduated from Holy Cross High School before enrolling at Providence College of Nursing in Oakland and received her R.N. degree in 1964. While attending Providence, Judy met her future husband, Bob Stammerjohan, who was a student at Saint Mary’s College in Moraga. Following graduation, she worked as a nurse at Saint Luke’s Hospital in San Francisco and, after her marriage, at Doctors Hospital in San Leandro. She and Bob were married in 1965. A year later, their daughter, Sheryl, was born and they bought their first home in Dublin, where they lived for the next 13 years. Their son, David, was born in 1968. In 1979 she and her family moved to Turlock after Bob took a position as an administrator for the Turlock School District. A few years later, she joined the staff at Emanuel Medical Center in Turlock where she served initially as a hospice nurse and then for many more years as a home health nurse. She quickly gained a reputation as a caring, competent and very likeable nurse. She took great pride in being a nurse. She retired from EMC in 2002 when Bob retired from the school district. Judy and Bob loved living in Turlock. After their retirements, they traveled extensively, visiting over 40 foreign countries on six different continents, often traveling with longtime close friends. Judy was strong in her Christian faith and a longtime, active parishioner at Sacred Heart Catholic Church. She also enjoyed gardening and cooking, but mostly loved being with her family and friends and was intensely proud of her daughter, Sheryl, and son, David. Judy is survived by her husband, Bob; daughter, Sheryl Eberhardt (Bob) of Davis; son David Stammerjohan (Marnie) of Carmichael; sisters, Barbara Kovacich of Seattle and Kathryn Karl of Portland; grandsons, Riley (Dezi), Parker and Logan Stammerjohan; granddaughters, Sofia and Sydney Eberhardt; and great-grandchildren, Lucas and Emma Marie Stammerjohan. The family is indebted to and deeply appreciative of the outstanding and caring staff at both Doctors Medical Center in Modesto and the Alexander Cohen Hospice House. In lieu of flowers, contributions can be made to Community Hospice Foundation, 4368 Spyres Way, Modesto, CA 95356 or online: https://give.hospiceheart.org. A visitation will be held from 3:00 p.m. to 6:00 p.m. on Monday, May 3, 2021, at Turlock Funeral Home, 425 N. Soderquist Rd., Turlock. There will be a funeral Mass at 10:00 a.m. on Tuesday, May 4, 2021, at Sacred Heart Catholic Church, 1200 Lyons Ave., Turlock, followed by the burial at Turlock Memorial Park. Due to Covid precautions, masks are required at all services.

Judy Stammerjohan, 78, died peacefully at Alexander Cohen Hospice House in Hughson on April 24th. She had suffered a massive stroke ten days earlier and there was no hope of recovery. She had three previous, less serious strokes that had already... View Obituary & Service Information

The family of Judy Stammerjohan created this Life Tributes page to make it easy to share your memories.

Send flowers to the Stammerjohan family.