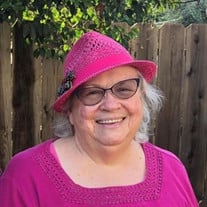 June P. Lusher, 82, beloved wife, mother, grandmother and great-grandmother, left us for her heavenly rest Thursday, May 27, 2021. She was predeceased by the love of her life, Danny D. Lusher, Sr.; her parents, Harold and Audrey (Maynard) McClanahan; siblings Hazel “Ginger” Craft, Tillie Lowder, and Richard McClanahan; and son-in-law Rick Whitney. June is survived by her five children: June Whitney, Dan Lusher, Jr. (Diane), David Lusher and Nathan Lusher (Kimberly), all in the greater Turlock, CA area; son Matthew Lusher (Tracy) of Virginia; and sister Audrey Guardado of Texas. Her survivors also her include her grandchildren Landon Whitney (Veronica), Melissa Whitney-Apolinar (Ty), Cherie Miles (Kaleb), Natalie Lewis (Chris), Stephanie McCary (Zach), Nathan Lusher II (Chloe), Aaron Lusher (Flor), Adam Lusher and Jaclyn Lusher. She also leaves 13 great-grandchildren, many nieces and nephews, and extended family members around the country. Born December 4, 1938 in Huntington, WV, June married Dan Lusher, Sr. in 1957 and she began her adult life as a devoted wife and mother. Soon after, she gave her heart to the Lord and remained a devoted Christian the rest of her life. In 1965, the family moved to Turlock and became members of Full Gospel Tabernacle. In 1980, when her children were nearly grown, she felt a new calling to help her community and pursued a college education to become a family counselor and psychotherapist. She attended California State University, Stanislaus, sharing her baccalaureate college experience with her sons David and Matthew, including the same Psychology major with David (taking some of the same classes together!) and graduating in the same ceremony with Matthew in 1985. Her master’s degree included ground-breaking research published in her field that remains available to psychology and counseling collegiate academia across the country to this day. Her career as a Marriage and Family Therapist flourished first through her work with the organization Parents United in Modesto and the Stanislaus (CA) Department of Behavioral Health Services, where she worked with both abuse survivors and convicted felons, becoming especially distinguished in working with convicted deniers. She also began private practice as a skilled psychotherapist, maintaining her office in Turlock for over 25 years. June greatly enjoyed her work with struggling individuals and families; for many years former clients would stop her during the course of a normal day out in public to thank her for the help her counseling gave them. June would often downplay these encounters by telling friends or family members privately that “a lot of people just needed the kindness of a parent they never felt in their own lives.” June retired at 77 in January 2016. In retirement, she enjoyed spending time with her children and extended family, making handmade gifts for so many, either with her knitting or cooking skills (who in the family will ever forget her holiday crescent rolls and Swedish tea rings, her famous chocolate cake, or the years where she knitted slippers for her kids, grandkids, and great-grandkids!). She pursued many interests, including travel, reading, the arts, film and her British mysteries; she was also an avid gardener, spending nearly every day she felt able planting and caring for her plants and flowers. She also enjoyed her beloved pets over many years; Phryne and Charlie will miss her. We say a final goodbye to June at Turlock Funeral Home this coming Friday and Saturday. Her viewing will be held from 5 to 8 p.m., on Friday, June 18th, followed by the funeral service at 10 a.m., on Saturday, June 19th. Both services will be held at Turlock Funeral Home, 425 N. Soderquist Rd., Turlock CA 95380 (https://www.turlockfuneralhome.com). June will be laid to rest with a private ceremony at Turlock Memorial Park. All who knew June—family, friends, professional colleagues, clients and church friends—are welcome to attend. Anyone wishing to, may contact the Lusher family at (209) 678-3150 or [email protected]

June P. Lusher, 82, beloved wife, mother, grandmother and great-grandmother, left us for her heavenly rest Thursday, May 27, 2021. She was predeceased by the love of her life, Danny D. Lusher, Sr.; her parents, Harold and Audrey (Maynard) McClanahan;... View Obituary & Service Information

The family of June Patricia Lusher created this Life Tributes page to make it easy to share your memories.

Send flowers to the Lusher family.