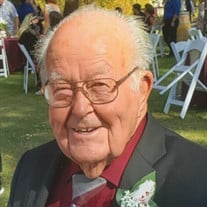 Kenneth Fred Lundell, age 95, of Hughson, went to be with his Lord and Savior on January 11, 2022. He was born in Turlock, California on January 31, 1926, to Daniel Fred and Mabel (Starn) Lundell. He was raised on a peach farm in Hughson where his son and family now reside. During his childhood years he attended Hughson schools, graduating from Hughson High School in June 1944. During his senior year he received his induction notice and was sworn into the US Navy in April, but he was allowed to finish school. Immediately after graduation, he left for boot camp and later radio school in Farragut, Idaho. He was then sent to Fort William McKinley, Philippine Islands near Manila where he served as a radioman. An interesting part of this duty was being on radio duty the night the Japanese made plans to surrender. He witnessed all the brass conversing on the station giving the Japanese instructions by radio code. He proudly served his country and was honored to be a World War II veteran. A favorite memory as a World War II veteran, was participating in an Honor Flight to Washington DC in October 2015. After being discharged from the Navy in 1946, he returned to the states and attended Modesto Junior College, where he majored in Agriculture and graduated in 1948. He began farming peaches and almonds in the Hughson area, where he remained throughout his life. In 1954, he married Carol Ann Evenson to whom he was happily married for over 54 years. After spending the first two years of marriage living in town, he purchased a farm in Hughson that is still in the family today. He was a charter member of Monte Vista Chapel in Turlock where he actively served in various capacities over the years. His passion in life was serving God and others. He was truly a man who reflected God’s love in everything he did throughout his life. He loved his family dearly, and leaves behind a legacy for his children, grandchildren, and great-grandchildren that will never be forgotten. He was a wonderful husband, father, grandfather, great-grandfather, and good friend to many throughout his lifetime. In addition to his church, he was a former member of the California Canning Peach Association, Tri-Valley Growers/Seneca Foods Corporation, Blue Diamond Growers, and the Stanislaus County Farm Bureau. He was proud of his Swedish heritage and was an active volunteer at Skandi-Fest in Turlock. Kenneth leaves behind his three children: daughter and son-in-law, Susan (Don) Peterson of Hughson; daughter and son-in-law, Debbie (Bob) Wohld of Denair; and son and daughter-in-law, John (Cindy) Lundell of Hughson. He is also survived by his eight grandchildren: Kaleb (Natalie) Peterson, Joshua (Ashley) Peterson, Meredith (Phillip) Jaureguy, Jeremy (Christine) Wohld, Gabriel (Brie) Wohld, Nathan (Courtney) Wohld, Scott (Megan) Lundell, and James Lundell, as well as 11 great-grandchildren: Odin, Kaleb, Jayden and Layton Peterson; Ryela Peterson; Haizea and Ezra Jaureguy; Joseph and Mackenzie Wohld; and Noah and Evanson Wohld. He also leaves behind many nieces, nephews, family and friends and his very special friend for the past six years, Jeanne Yeates, whom he met at Samaritan Village in Hughson where they both resided until the time of his death. He was preceded in death by his wife, Carol Ann Lundell; one sister, Frances Haarstad; one brother, Melvin Lundell; parents, Fred and Mabel Lundell; and step-mother, Dorothy Lundell. Visitation will be held on Friday, January 28, 2022, from 5-8 PM, followed by a funeral service on Saturday, January 29, 2022, at 10 AM, at Turlock Funeral Home. Burial will follow at Turlock Memorial Park. Memorials may be made to Monte Vista Chapel Missionary Fund, 1619 E. Monte Vista Ave., Turlock, CA 95382, in memory of Kenneth Lundell.

Kenneth Fred Lundell, age 95, of Hughson, went to be with his Lord and Savior on January 11, 2022. He was born in Turlock, California on January 31, 1926, to Daniel Fred and Mabel (Starn) Lundell. He was raised on a peach farm in Hughson where... View Obituary & Service Information

The family of Kenneth Fred Lundell created this Life Tributes page to make it easy to share your memories.

Kenneth Fred Lundell, age 95, of Hughson, went to be with his...

Send flowers to the Lundell family.