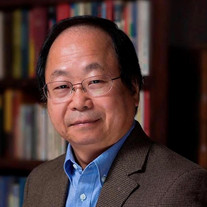 Kou Yang, loving husband, father, brother and uncle passed away peacefully of natural causes on February 6, 2021 at Kaiser hospital in Modesto, CA. Kou was born in a rural village in Sayaboury, Laos on December 12, 1954 to parents, Nchaiv Pov Yaj and Zag Tsab. He was the first son and grandson born in a large extended family. When he reached the age of six, his illiterate parents decided to send him into town to get some education. At a young age, he had to leave his family, stay with a family relative in a faraway town, in order to receive his education. When he was seventeen years old, his father passed away suddenly. His family endured financial hardship and were unable to continue to support Kou and his education. He was asked to give up school and come back home. Kou decided otherwise because his father told him to go school until the end. Kou would not give up his father’s dream. He continued his education and completed high school. He was preparing to further his education in France, but before he could, the war broke out and his family were forced to leave Laos. Kou eventually settled in the United States in 1976 as a refugee. Once again, he had to start at the bottom and learn a new language. He went to an adult school at night to learn the language while working full time to support himself and his family during the day. His hard work eventually paid off when he received his Bachelors of Art degree in Sociology from CSU Fresno in 1987. He later obtained his Masters degree of Social Work from CSU Fresno in 1991. Lastly, he obtained his Doctorate degree in Education from UC Davis and CSU Fresno in 1995. Kou was very proud of his achievements because he had completed all of his university education while he was working full time with Fresno county as a social worker. After he graduated, he accepted a teaching position as tenure Assistant Professor with University of Wisconsin-Eau Claire. He taught at UWE for a year and then decided to return to the golden state, California in 1997. Soon after, he accepted the position as tenure track Assistant Professor with CSU Stanislaus. He taught Asian American studies and really enjoyed the subject. After teaching for about 16 years, he decided to retire and fulfill his dreams of traveling and writing books. He retired in December, 2014 from CSU Stanislaus after reaching his full professorship. During his retirement, he traveled to many countries including; Laos, Thailand, China, Mongolia, Japan, South Korea, India, Vietnam, Cambodia, Myanmar, France, Czech, Hungary, Germany, Puerto Rico, Peru, and many more. He authored, co-authored and published about ten books. He was in the process of writing two more books when he became ill. He was preceded in death by both his parents and a sister, Shoua Yang. He is survived by his loving wife of thirty years, Jennifer Yang of Turlock, Ca; son, Kong Cha Yang of Georgia; daughters, Lisa Yang of Turlock, CA; Lilian Yang of Huntington Beach, CA; Lina Yang of Turlock, CA. Brothers, Touly Yang of Clovis, CA; Tou Blong Yang of Clovis, CA; sisters, Cha Thao of Fresno, CA; Vue Lee of Thailand; Ka Heu of France; Bee Yang of Fresno, CA, and May Yang of Fresno, CA. He is also survived by numerous nephews, nieces, cousins and friends. Kou will be remembered for his kindness, gentle spirit, his knowledge in numerous areas, and his dedication to community service, especially for the Hmong community. His untimely passing left a big hole in many people’s hearts and will forever be remembered. Interment will be at Turlock Memorial Park, Turlock, California on the 22nd of February, 2021. Due to Covid-19 restrictions, services and interment will be private. A celebration of his life and achievements will take place when we can safely gather again.

The family of Kou Yang created this Life Tributes page to make it easy to share your memories.

Send flowers to the Yang family.