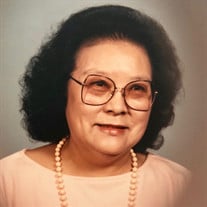 Lily Shoji Hamaguchi passed away peacefully at Grace Nursing Home in Livingston, CA, on February 3, 2021 at the age of 96, with family members by her side. Lily was born in Livingston on November 23, 1924, the fifth of eight children and the second daughter of Rinai and Tsutano Shoji. She attended Livingston High School, where she played varsity tennis and was in the school band, graduating in the spring of 1942. She received her diploma while confined with her family at Merced Assembly Center as part of the mass incarceration of Japanese Americans in the western United States after the attack on Pearl Harbor in 1941. The Shojis were eventually moved to Amache Relocation Camp in Granada, CO, for the duration of the war. Lily was able to leave the camp to attend school in Denver, and briefly moved to Dayton, OH, to work as a secretary, returning to Livingston in the fall of 1945. In April 1947 Lily married Joe Hamaguchi, and their son Leslie was born the following year. The family lived first in Livingston, then in Atwater. Joe passed away in 1972, and Lily stayed in Atwater, working for many years at County Bank, from which she retired in 1997. In the early 2000s her only son, Les, fell ill with cancer and moved from his home in New York City to Atwater, where Lily cared for him until his death in 2006. In addition to Joe and Les, Lily was preceded in death by her seven siblings: Toshiaki, Toshio, Frank, Kazuko, Arthur, James, and Mary. In spite of these painful losses, Lily remained stoic and upbeat, was active for many years in her church and community, and was devoted to her extended family. She will be dearly missed by her many nieces, nephews, and in-laws. Lily’s family wishes to express their gratitude to the staff of Grace Nursing Home for their kind care in Lily’s last years. Due to Covid-19 concerns, memorial services will be postponed until a later date. Any correspondence regarding Lily may be sent to her family by email at: [email protected]

Lily Shoji Hamaguchi passed away peacefully at Grace Nursing Home in Livingston, CA, on February 3, 2021 at the age of 96, with family members by her side. Lily was born in Livingston on November 23, 1924, the fifth of eight children and the... View Obituary & Service Information

The family of Lily Shoji Hamaguchi created this Life Tributes page to make it easy to share your memories.

Send flowers to the Hamaguchi family.