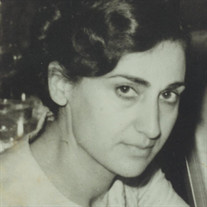 Luba means Love in Russian. Born in Leningrad, Russia to Ostapanos and Sona Yetgar, Luba had two sisters Mary and Lillie and a brother named Ivan. From Russia, her family immigrated back to Iran during World War II leaving behind her sister Mary. In 1971, with her husband, her one year old daughter Mary, and mother Sona, she immigrated to Yonkers, New York where she lived in a small knit Assyrian community for nine years. Her daughter, Lillie, was born in Yonkers, New York in 1972. In 1979, Luba and her small family moved to Turlock, California. Later, her brother Ivan joined her in Turlock. In Turlock, she became an active member of the Assyrian American Civic Club. She served as Vice President along with President Maggie Synstad for the Ladies Auxiliary of the AACCOT. With her continued dedication to AACCOT, she later served as President of the ladies auxiliary. In 1999, she was blessed with her first grandchild, Levi Ivan Howell. In 2002, her grandson, Adam Michael Howell, came into the world to give her continued joy. All that was missing was a granddaughter. In 2007, her granddaughter, Emma Mary Smith, was born, completing her family's legacy. Her daughters, Mary and Lillie, named their children's middle names after Luba's siblings. It was their way of honoring their mother. Although Luba had no formal education, she was a crafty, resourceful woman who worked hard to instill the importance of education in her two daughters. She made sure her daughters needed nothing and had opportunity to seek out higher education. Luba was able to witness both her daughters graduate from college. She provided care for her grandsons so that her daughter could maintain her career. She looked up to her son-in-law, Lonnie Howell, as the man of the house and adored him to no end. She often nudged him to take the family to Reno and Lake Tahoe for some slot machine fun. Of course he obliged every single time. She was thrilled when her daughter Lillie bought her first home in Turlock and was proud of both her girls. Luba loved her home and kept her garden blooming year round. She created delicious Assyrian dishes and her hobbies included sewing and knitting. In fact, she taught many friends, young and old, how to knit. Her favorite past time was playing Bingo with her friends. She maintained her Catholic Faith and attended St. Thomas Catholic Church since the early 80's. Luba Benjamin Yetgar Khanderish is survived by her two daughters, Mary and Lillie; her grandchildren, Levi, Adam and Emma; and her sons-in-law, Lonnie Howell and Antonio Smith. In closing, little Luba was an exceptional woman who was both frugal and generous, witty and kind, fast forgiving and loyal until the very end. She will be dearly missed. A visitation will be held from 4 p.m. to 7 p.m., on Tuesday, June 1, 2021. A funeral service will be held at 10:00 a.m. on Wednesday, June 2, 2021. All services will be held at Turlock Funeral Home, 425 N. Soderquist Rd., Turlock. Following the funeral, Luba will be laid to rest at Turlock Memorial Park.

Luba means Love in Russian. Born in Leningrad, Russia to Ostapanos and Sona Yetgar, Luba had two sisters Mary and Lillie and a brother named Ivan. From Russia, her family immigrated back to Iran during World War II leaving behind her sister... View Obituary & Service Information

The family of Luba Benjamin Yetgar Khanderish created this Life Tributes page to make it easy to share your memories.

Send flowers to the Khanderish family.