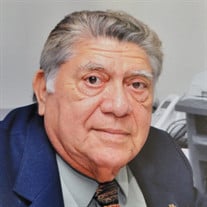 Luis Alberto Fernandez passed away peacefully at his home on June 25, 2021, surrounded by his family. He was 83 years old. Luis was born on June 21, 1938 to Justo Pastor and Ana Magdalena Fernandez in Managua, Nicaragua. At the age of 16, he left Nicaragua to study law at the Universidad Nacional Autónoma de México. After finishing school, he returned to Nicaragua, where he took a job at the Banco de América, quickly rising through the ranks to become regional vice president. While at the Bank, he met his life-long wife, Hada, who he married in 1967. They had 5 children. In 1980, Luis and family left Nicaragua, fleeing a violent civil war and leaving everything behind. Fortunately, Luis landed in Turlock, California, where he settled and started a new life. Those first years were difficult, having to learn English, getting used to a new culture, and having no work. In time he became employed through Farmers Insurance, and with more time he opened his own office in Ceres. Luis once again flourished. His business grew and his clientele blossomed. He was able to send his children to college and live a comfortable life after working over 30 years for Farmers Insurance. Luis loved working hard, talking to people, making friends, and watching baseball and basketball. In his home and at work, he was generous and welcoming. Most of all, Luis loved all of his family. Luis is survived by his wife of 54 years, Hada Luz, as well as his five children: Jorge, Luis, Hada, Ana, and Rachel. He is also survived by 7 siblings – Justo, Daysi, Roger, Nacho, Freddy, Fatima, and Claudia – as well as 10 grandchildren – Ariana, Gabriel, Jianna, Ethan, Justin, Tristan, Jayden, Gabriel, Tyler and Bryden. He leaves 3 great-grandchildren – Skye, Quin, Abigail – and many nieces and nephews. A viewing will be held from 4:30 to 6:00 p.m. on July 1, followed by the rosary at 6:00 p.m. A Funeral Service will be held at 2 p.m. on July 2. Both services will be held at Turlock Funeral Home, 425 N. Soderquist Rd., Turlock. Following the funeral service, Luis will be laid to rest at Turlock Memorial Park. In lieu of flowers, the Fernandez family has requested that memorial donations be made to the American Diabetes Association.

Luis Alberto Fernandez passed away peacefully at his home on June 25, 2021, surrounded by his family. He was 83 years old. Luis was born on June 21, 1938 to Justo Pastor and Ana Magdalena Fernandez in Managua, Nicaragua. At the age of 16, he... View Obituary & Service Information

The family of Luis Alberto Fernandez created this Life Tributes page to make it easy to share your memories.

Luis Alberto Fernandez passed away peacefully at his home on...

Send flowers to the Fernandez family.