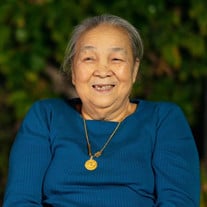 Maneewan Daoheuang was a beloved and respected mother, daughter, sister, aunt, grandmother, great-grandmother, and dear friend. She passed away peacefully in Modesto, California, a few days after having a cardiac arrest, at the age of 71. She is survived by her younger brother, her husband, three daughters, four sons, thirteen grandchildren, and four great grandchildren. A Buddhist funeral service will be held on Monday, November 1, 2021, from 2:00 p.m. to 6:00 p.m., to help pave her way to the next life. The service will be conducted in the Main Chapel at Turlock Funeral Home, 425 N. Soderquist Rd., Turlock. There will be a ceremony held at the family home following the service. Maneewan was born to Khongmy (mother) and Khone (father) Panyanouvong in Paksan, Laos. She had three sisters: Manhsy, Chanthaly, and Khamphet, and a younger brother, Khamsuon, who is alive and well in Laos. Maneewan was first married to a high-ranking Lao officer at a young age through an arranged marriage as his second wife. In 1966, they had their first daughter, Khornsawan “Khorn”, followed by Seesouphan “Paul”, and Somphorn “Pon”. Eventually her husband was declared Missing-in-Action. Many years later, Maneewan reunited with his first wife in the United States and they became best friends until her recent passing. Maneewan married Noukane Daoheuang for love. Noukane helped the United States military in Laos during the Vietnam War. In 1975, they had their first daughter Somphane “Sophie”, followed by Somjit “Jit”, and gave birth to her baby girl Outhit later in a Thai refugee camp. In 1978, three years after the end of the Vietnam war, faced with oppression, hunger, poverty, limited freedom and no opportunity, Maneewan and Noukane made the difficult decision to find a better life for all five of their children, Khorn, Paul, Pon, Sophie and Jit, a journey that would ultimately take eight years to complete. With Sophie still a toddler, and Jit an infant, they gathered what they could and headed South to the Mekong River (the border to Thailand). The family snuck across the river into Thailand. While at a Thai refugee camp, Outhit was born. They travelled from Thailand, to the Philippines, then later to the United States. Each stop was another barrier on their journey. Finally, after eight long years of travel and waiting, a Presbyterian church sponsored the entire Asian “Brady Bunch” of three girls, three boys, and their parents, to move to the United States. In 1990, Noukane passed away at the age of 45. Maneewan persevered. She was frugal. Despite her limited income, she always managed to find money for her children’s birthdays, or to buy them a reliable car after high school graduation. That’s a LOT of cars! On April 14, 1994, Maneewan married Khamphouy Phongmaly. In 1995, Fernandez (Fernie) was born. Fernie is Maneewan’s youngest child, and the only one born in the United States. Khorn, married to Padith “Si” Shonrasin, gave Maneewan three grandkids: Ritchie, Rasny “Vanesa”, and Theresa. Ritchie married Katy, who gave birth to four great-grandkids: Landon, Gwendolyn, Owen, and Kali. Maneewan’s second child, Paul, married Thale “Pam” who gave birth to two grandkids: Kobe and Amelia. Her third child, Pon, married Neepha who gave birth to four grandkids: Dominic, Ty, Bella, and Emma. From her marriage with Noukane, Maneewan gave birth to Sophie, who gave birth to two grandkids: Anthony and Sabrina Moua. Her second child, Somjit gave her two grandkids: Jayden and Jayla. Her youngest daughter, Outhit is married to Kus Mendoza. Although illiterate, poor, and struggling, Maneewan showered her family and friends with a limitless supply of unconditional love. She accepted people as they were. You could always be 100 percent your own person around her. Above all other things, beyond being a source of love, joy, and comfort to many people, Maneewan was dedicated to helping everyone who entered her life. She loved unconditionally and cared deeply about everyone whether related to her by blood or not. Maneewan made people feel at home in her presence. Non-family members would often call her mom or auntie or grandma – because she made them feel loved and cared for. She had a powerful sixth sense – she always knew if you needed a little extra love or support. She would just magically reach out to you at the right moment to make things better. Maneewan lived by the maxim, "Love others the way you want them to love you - treat others how you want to be treated.” Her energy and spirit will live on in us, and we will forever be grateful for her presence in our lives. She made the world a better place for her having been here. What did she teach us? All we can do is forgive quickly and be kind, to others and ourselves. Cultivate gratitude; don’t be greedy. Cherish your family members, and go all-in in life. There was a time she was caught playing a video game. She sat there tightly holding the game controller. Instead of just pushing the buttons, she moved her WHOLE BODY with it. She was all-in, and that’s how she lived her life!

Maneewan Daoheuang was a beloved and respected mother, daughter, sister, aunt, grandmother, great-grandmother, and dear friend. She passed away peacefully in Modesto, California, a few days after having a cardiac arrest, at the age of 71. She... View Obituary & Service Information

The family of Maneewan Daoheuang created this Life Tributes page to make it easy to share your memories.

Send flowers to the Daoheuang family.