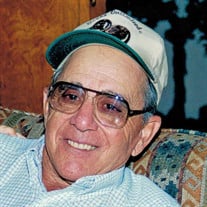 Beloved husband, father, and grandfather, Manuel Rocha Machado, passed away peacefully at his home surrounded by his adoring family on May 11, 2021. Born on June 2, 1931 in Stevinson, California in his parent’s farm house to Manuel and Rosa Machado. He was a first-generation Californian whose family settled in Stevinson after immigrating from the Azores islands circa 1910. Manuel’s father Manuel Sr. was a dairy farmer and his mother was a homemaker, he attended Merquin Elementary in Stevinson until graduating 8th grade, when working on his father’s dairy interrupted his education. “In those days, they figured work came first”, was a quote Manuel used to say. Manuel worked alongside his father until he started working for Mr. Kelley branding, running cattle, and working as a cowboy. Years later he began operating heavy equipment for the Stevinson Corporation, there he drove one of the first crawler/backhoes in the central valley in the late 1950’s, an Allis-Chalmers Mark V. In 1950, Manuel met the love of his life Madeline Oliveira when they were both members of a mutual friend's wedding party and it was love at first sight. They were engaged in 1952 and married on April 19, 1953. Upon returning from their honeymoon, they made the family ranch in Stevinson their home. This is where they would start their future and raise their family. They welcomed their first child Rosemary in 1954, and expanded their family following with Manuel, Ernest, Daniel, and Steven. In 1962 Manuel and Madeline built their dream home on the ranch, making room for their ever-growing family. In April of 1969, after encouragement from his boss Mr. Kelley, Manuel and his wife Madeline took a risk at the time with their five young children, and started Machado’s Backhoe Service. Starting out with only one backhoe, he quickly gained the trust and confidence of the community developing lifelong customers and friends. Working with local farmers, dairies, and duck clubs Manuel slowly began to build his business, always keeping the foundation based on taking care of his customer’s needs as number one. In 1971 they welcomed their final child, Robert, what a pleasant surprise he was, hence completing their family. Manuel was a dedicated and devoted community member, serving on the Hilmar Unified School Board for 13 years starting in 1976, and residing over the board as both the President and Vice President with some of his dearest friends. Manuel loved to go camping, every September he would load up all of his kids in the back of the camper and head to the hills to go deer hunting and just enjoy nature. Because of his love of nature, in the mid 80’s Manuel purchased a home in Mi Wuk Village. He loved going up to the cabin with his family, playing in the snow, taking walks to the store, and just breathing in the fresh air. In 1991 Manuel and Madeline retired from the daily operations of the business, but he still kept a watchful eye on his sons and grandchildren that took it over. Manuel and Madeline moved to the big city of Turlock where they began their new routine of morning and afternoon walks, Manuel always in his cowboy boots, daily breakfast at his various local hotspots, watching their grandkids play sports, and weekday trips to Carmel or the cabin in the hills with their beloved dog Hank. Retirement is when Manuel really began to enjoy his grandchildren and life. He was blessed with fifteen grandchildren, fourteen great grandchildren and currently has two more on the way. Manuel’s passion was being a cowboy, taking care of his customers, and being a family man. He instilled in his children and grandchildren the importance of hard work and the love of family. Manuel loved to help anyone that he came in contact with. Community service and giving back is what brought him pure joy. Whether it was training a new employee on a piece of equipment, saving the Stevinson community from flooding when the danger arose of the main canal breaking, mowing his neighbor’s lawn or trimming their trees. He was passionate for people, community, social gatherings, and his family. Manuel is survived by his loving wife of 68 years Madeline Machado; six children Rosemary Mendes (Dave), Manuel Machado (Mary), Ernest Machado (Donna), Daniel Machado (Corinne), Steven Machado (Debra), Robert Machado (Leslie); and 15 grandchildren David Mendes Jr., Lindsey Rosa, Jason Machado, Natalie Pires, Brianna Rush, Michael Machado, Dayne Mendes, Madeline Machado, Daniel Machado, Matthew Machado, Vanessa Machado, Kimberly Machado, Toni Marie Connell, Ryan Machado, and Olivia Machado. A visitation will be held from 6:00 p.m. to 7:00 p.m., followed by the Rosary at 7:00 p.m., on Thursday, May 27th at Turlock Funeral Home, 425 N. Soderquist Rd., Turlock. A funeral Mass will be held at 11:00 a.m. on Friday, May 28th at Holy Rosary Catholic Church, 8471 Cypress St., Hilmar. Following the Mass, Manuel will be laid to rest with a graveside service at his final resting place, Turlock Memorial Park, 575 N. Soderquist Rd., Turlock. In lieu of flowers, donations may be made to: The Manuel R. Machado Entrepreneur/Trade School Scholarship Fund ℅: Farmers & Merchants Bank, P.O. Box 759, Hilmar, CA 95324.

Beloved husband, father, and grandfather, Manuel Rocha Machado, passed away peacefully at his home surrounded by his adoring family on May 11, 2021. Born on June 2, 1931 in Stevinson, California in his parent&#8217;s farm house to Manuel and... View Obituary & Service Information

The family of Manuel Rocha Machado created this Life Tributes page to make it easy to share your memories.

Send flowers to the Machado family.