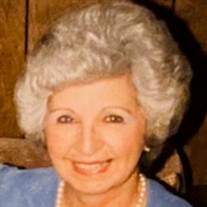 Marilyn Wilson, a resident of Turlock, passed away peacefully at Covenant Village on Wednesday, September 15, 2021, three days shy of her 91st birthday. Marilyn was born to Clifford and Fern Garner in New Castle, Indiana on Thursday, September 18, 1930. At fifteen months old, she contracted Scarlet Fever and consequently both ear drums were severely damaged. In spite of the loss of much of her hearing, Marilyn graduated valedictorian of her high school graduating class. She said, “I just wanted to make my parents proud of me!” Marilyn became good friends with Jesus at a very young age. One of her favorite Bible verses was Isaiah 43:1-2: But now, this is what the Lord says- he who created you, Jacob, he who formed you, Israel: 'Do not fear, for I have redeemed you; I have summoned you by name; you are mine. When you pass through the waters, I will be with you; and when you pass through the rivers, they will not sweep over you. Marilyn and Gordon were married on October 23, 1948. Gordon was in the Navy and they were stationed in various places, including Munford, TN; Norfolk, VA; and the Panama Canal Zone. After Gordon was honorably discharged from the Navy, they lived for some time in Indianapolis, IN and San Jose, CA. After retirement, they settled down in Turlock. Marilyn loved to travel and together they traveled much of the world during their nearly 73 years of marriage. Along with her loving parents, Marilyn was preceded in death by her brother, Edward Garner. She is survived by her brother, Bill Garner; husband, Gordon Wilson; two children, Mike Wilson and Susan Terrell; two grandchildren, Leah (Terrell) Fox and Andrew Wilson; and three great-grandchildren, Joseph Fox, Luke Wilson, and Hannah Wilson. Marilyn will be dearly missed. May we find solace in knowing she is at peace with the Lord.

The family of Marilyn Lou Wilson created this Life Tributes page to make it easy to share your memories.

Marilyn Wilson, a resident of Turlock, passed away peacefully...

Send flowers to the Wilson family.