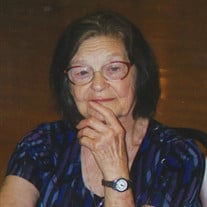 Mary “Rachel” Monismith, a resident of Turlock, passed away at Memorial Hospital on Thursday, January 20, 2022. She was 88 years old. Rachel was born in Rains County, Texas, on June 7, 1933, to Eugene and Birdie Reynolds. As a young girl, she moved to Merced where she attended school up until the 12th grade. Rachel married the love of her life, Jesse Grant Monismith, on December 14, 1956. Together, they moved to Turlock and raised their three children. An exceptional homemaker, she devoted her life to her three children and then later to her grandchildren, as well. Rachel was preceded in death by her husband, Jesse. She leaves behind her daughter, Rachel (Matthew); daughter, Terry (David); son, Bruce, and his girlfriend Suzy; brother, Jesse; sister, Peggy; as well as four grandchildren, Spencer, Tyler, Crystal, and Ashley; and six great-grandchildren, Kylie, Jasmine, Julian, Dylan, Adelyn, and Lucas. A viewing will be held from 9 a.m. to 10 a.m., followed by the funeral service at 10 a.m., on Friday, February 4, 2022, at Turlock Funeral Home, 425 N. Soderquist Rd., Turlock. Following the funeral, Rachel will be laid to rest at Turlock Memorial Park.

The family of Mary "Rachel" Monismith created this Life Tributes page to make it easy to share your memories.

Mary “Rachel” Monismith, a resident of Turlock, passed away at...

Send flowers to the Monismith family.