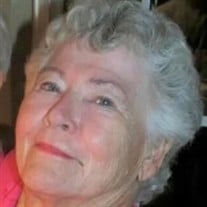 Mary Dell Pritchard, a resident of Turlock, CA, passed away peacefully, with her husband, Richard, by her side, on Sept 28, 2021, just one day after celebrating their 69th wedding anniversary. Mary was born on November 10, 1933, in McAlester, OK, to Justus and Mary Hyden. She was the second child of four and the only daughter. Her family moved to Modesto, CA, when she was a teenager, and she went on to graduate from Modesto High School. Soon after graduation, while working at a pickle plant in Modesto, she met Richard Pritchard. The two fell quickly in love and, two short months later, they married, on September 27, 1952, which also happens to be Richard’s birthday. Richard always said Mary was the best birthday present he ever received. Richard and Mary made their first home in Modesto where they had five children. In 1968 they relocated to Turlock, CA, and finished raising their family there. Mary worked a few years in a Modesto cannery early on in their marriage but eventually stayed home to be a homemaker. Her five children grew up to bless her with many grandchildren and great-grandchildren, who all adored her as much as she did them. Mary was a spunky lady who had a heart for people and was known for giving the best hugs far and wide. She had a deep faith in the Lord and taught Sunday school in her younger years. She also had a green thumb and maintained a beautiful garden up until she became wheel-chair bound and, even then, would indicate to her family as to which plants needed watering and which had a weed that needed pulling. Up until her stroke six years ago, Mary was an avid reader and also enjoyed family camping trips, traveling with Richard, doing ceramics, painting and singing, especially church hymns, which she frequently sang around the house while doing housework. Mary was preceded in death by her father, mother and step-father, Robert Baker. She is survived by her husband, Richard Pritchard, her five children, Carolyn (Lonnie) Humphrey, Beverly Pritchard, Mark (Buffy) Pritchard, Janet (Jaime) Hutcheson and Sharon (Mike) Ostrander. She leaves behind 12 grandchildren, 18 great-grandchildren and several nieces and nephews. Mary is also survived by three brothers, Bill, Joe and Jimmy Hyden. A visitation will be held from 4:00 p.m. to 7:00 p.m., on Tuesday, October 5, 2021. A funeral service will be held at 11:00 a.m., on Wednesday, October 6, 2021. All services will be held at Turlock Funeral Home, 425 N. Soderquist Rd., Turlock. Following the funeral, Mary will be laid to rest at Turlock Memorial Park.

Mary Dell Pritchard, a resident of Turlock, CA, passed away peacefully, with her husband, Richard, by her side, on Sept 28, 2021, just one day after celebrating their 69th wedding anniversary. Mary was born on November 10, 1933, in McAlester,... View Obituary & Service Information

The family of Mary Dell Pritchard created this Life Tributes page to make it easy to share your memories.

Send flowers to the Pritchard family.