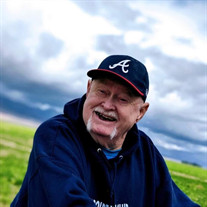 Michael James Jones, a long time Turlock resident, passed away peacefully, surrounded by family on February 11, 2021. Michael was born on June 11, 1942 to James Henry and Janie Lou Jones in San Diego, California. He graduated from Ceres High school, class of 1960. He married the love of his life, Kay, on February 8, 1963 and started a family. Over the years, Michael worked for Turlock Irrigation district and, later in life, as a bus driver for The Bus in Turlock, where he made many long-lasting friendships. A loving husband, father, papa, brother, uncle, and friend, those who have met Michael are unlikely to have forgotten him. If his large frame did not capture attention (he stood 6 feet 6 inches tall), then surely his personality did. He had a sense of humor unlike any other, and he rarely left a person without cracking a joke. Making people laugh was one of his greatest pleasures. He had a larger-than-life presence, that could come off as intimidating, but once you got to know him you could see that he was a gentle giant. He had a warm smile that lit up every inch of his face, and a kind and giving heart. He would often go out of his way to help those in need, even if they were complete strangers. He could not stand to see others struggle, and he was never hesitant to offer whatever he could. Michael had many hobbies. He loved all sports, fishing, and hunting. He was a gifted baseball player, a sport that he fell in love with at an early age and continued to play well into adulthood. He looked forward to annual hunting trips with his boys, but what he cherished most was time with his family. Family was everything to him. He loved his “pretty little wife” Kay with all his heart. Their love was the foundation of their family, and they set a striking example of a strong and happy marriage. He loved going through every phase of life with his Kay. Michael found great joy in his children, grandchildren, and his great grandchildren. He absolutely loved being a Daddy, but being a Papa was his favorite job. He loved to capture memories in photographs and video. He was a master storyteller and often enthralled his children and grandchildren with his stories—he had so many! He gave the best hugs—the kind that just swallow you up and made you feel safe and loved. He was a strong, brave, and courageous man, one who is truly a legend in the eyes of his family. Michael joins his Father, James Henry Jones, his Mother, Janie Lou Jones (nee Scott), and his Sister, Barbara Jones in eternal rest. We take great comfort in knowing that he has been reunited with them. Michael is survived by his loving wife of 58 years, Linda Kay Jones (nee Gill), Son Nicholas Jones (Sandra), Daughter Carolyn Cross (Richard), Grandchildren Angela Liu (Jonathan), Ryan Garcia, Bethany Ranes, and Nicholas Jones (Lorena). Great Grandchildren Holden, Liam, and Olivia. Brother Steven Jones (Barbara), Sister Myrtle Miller (Greg), and many nieces and nephews. He also leaves behind his beloved dog, Moe, who rarely left his side. He will be missed greatly by his family and friends, but he will live on in our hearts forever. He has left us the greatest gift—memories. We will cherish our time with him forever and we will carry him with us for the rest of our lives. He lived his life the way he wanted to live it—full of laughter, love….and western movies. While his family is deeply saddened, we are blessed to have experienced a love so strong and unconditional. That will never be lost. “Tomorrow is the most important thing in life. Comes into us at midnight very clean. It's perfect when it arrives and it puts itself in our hands. It hopes we've learned something from yesterday.”-John Wayne

The family of Michael James Jones created this Life Tributes page to make it easy to share your memories.

Send flowers to the Jones family.