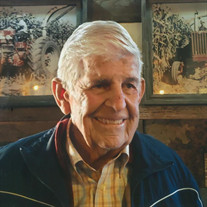 Norman “Big Papa” Lucas passed away peacefully at his home on November 3, 2021. Norman enjoyed good health during his 95 years of life even though he lost a kidney several years ago due to cancer. It was the past month that his kidney disease got the best of this dear man and sent him to heaven to join his beloved Freda, his wife of 74 years. Norman was born on March 3, 1926 in Oakland, CA, to parents Tony and Pauline Lucas. He had a brother, Al, and a sister, Josephine, who preceded him in death. In 1938, the Lucas family moved from Moraga to their current home in Turlock to farm and dairy, where Norman learned to milk his first cow, Blacky. Norman met Freda DeHart in Modesto when he was just 17. After she and her friend rode their bikes from Modesto to his home in Turlock for a visit, he knew she was the one! Norman and Freda married in 1945. In 1946, after Norman’s military service, they returned to the family dairy farm in Turlock to begin their farm life together. Norman milked cows, irrigated, farmed his land and invested in state-of-the-art equipment and practices. He expanded the dairy and turned it into a successful farming operation. While doing all this, he helped raise his growing family, served on numerous boards, was a 4H club leader, supported Turlock FFA and UC Davis Ag programs, and was an active member in his church. Norman demonstrated exemplary leadership and was a mentor to many. He always believed in others and in giving them a helping hand. His contributions to the dairy industry and local Ag community earned Norman and Freda induction into the Ag Hall of Fame in 2016. Norman loved his family, farming, friends, and fun. With Freda at his side (and often with family members and friends), he traveled to many countries, went on horse pack trips, played cards, golfed, team roped, fished, and always enjoyed a good Giants game. He and Freda had a Monday night dinner group and a Tuesday night card group which they seldom missed. He enjoyed arriving at the Mt. View corner early every morning for coffee and a hand of Pedro with friends and neighbors. He traveled to almost every state in the U.S., a great measure of his zest for life. Later in life, Norman could be found reading his farm magazines to stay current on Ag impacts, hoeing puncture vines on his land, riding his bike and picking, sorting, and sharing his delicious bottled olives. Norman was honest in his work and relationships, and he expected nothing less from others. Norman, “Big Papa,” was truly the leader of his family. Norman lost his best friend, Freda, in 2019. While challenging, he continued on, loving celebrations with his family and friends, and trips to Nevada. Norman is survived by his sons, Steve and Mike Lucas (Eileen Melson), and daughters, Carolyn Hayes (Darrell) and Cindy Starkey (David), along with his grandchildren, Sonia Lucas, Don and Christy Clark, Tom and Shelly Lucas, Rob and Dana Hayes, Lucas and Stephanie Hayes, Brooke and John Thompson, Courtney and Jason Machado, eleven great-grandchildren, and many nieces, nephews, cousins and numerous dear friends. Norman’s four children are all successfully involved in the Ag industry, due in large part to his influence and support. The community has lost a valued member and dedicated leader. A man who truly treasured all of his blessings in life and was loved and respected by all who had the honor to know him. The family thanks everyone for all the visits, cards, care packages, and prayers, and extends a special thanks to Norman’s caregivers, Celeste, Rosa, Deolinda, and Anna; they are true angels. While he will be missed by all, he has made Freda and his many friends and family members in heaven happy that he has arrived! The family kindly requests donations, in lieu of flowers, be sent to Local Warriors Club (LWC), P.O. Box 801, Turlock, CA 95381, or to a charity of your choice. A visitation with the family will be held from 4 p.m. to 7 p.m., with the Rosary at 5 p.m., on Thursday, November 18, 2021, at Turlock Funeral Home, 425 N. Soderquist Rd., Turlock. A Mass of Christian Burial will be held at 10 a.m. on Friday, November 19, 2021, at Our Lady of Assumption Catholic Church, 2602 S. Walnut Rd., Turlock. The visitation and Rosary will be livestreamed through Turlock Funeral Home. To watch, please visit: https://www.viewlogies.net/turlock/wPitA0t7G. When prompted by the website, enter the PIN 746-721 to view the service.

Norman &#8220;Big Papa&#8221; Lucas passed away peacefully at his home on November 3, 2021. Norman enjoyed good health during his 95 years of life even though he lost a kidney several years ago due to cancer. It was the past month that his kidney... View Obituary & Service Information

The family of Norman E. Lucas created this Life Tributes page to make it easy to share your memories.

Norman “Big Papa” Lucas passed away peacefully at his home on...

Send flowers to the Lucas family.