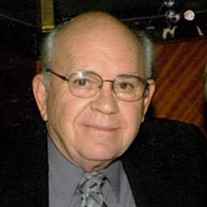 Richard August Swanson, 95, was born in Turlock, CA on April 21, 1926, to Warner and Vera Swanson, pioneers of the Youngstown Colony of Swedish immigrants in the Turlock area. He passed away peacefully at home on Tuesday, January 18, 2022. His formal education was at Johnson Joint and Hilmar schools. At the age of 18, in November of 1944, he was drafted to serve his country in the military. After basic training, he was shipped overseas to the European theater, stationed in Italy. When the war ended, he was placed on occupational duty in Pisa, Italy, until he was medically discharged and returned home in November of 1946. Shortly after, he established himself in the poultry industry. Some years later, he acquired land and added peaches and almonds to his ranching operation. Richard was a farmer at heart and could be seen driving his classic El Camino in the Delhi area, checking his orchards. In 1949, Richard met his future wife at a church social. He and Erlene Wenstrand were married on February 3, 1950, at Beulah Covenant Church, now known as Hope Church where they both attended and have been members all these years. God blessed them with three precious children: two daughters, Jane Hacker, Julie Swanson and son, Timothy Swanson. A strong bond and work ethic was instilled by working together as a family. Years later, as the business expanded his son Timothy joined him in the farming operation. Richard continued to remain interested in the business until his passing. Richard’s hobbies included fishing, gardening, and woodworking. Many of the woodworking projects were given to his children and grandchildren, and are cherished to this day. He also enjoyed traveling, especially taking cruises. Keeping in touch with Poultry associates was a Tuesday breakfast ritual for many years. He also looked forward to weekly breakfasts with local cousins sharing memories of growing up on Swanson Road in Delhi. As a WWII veteran, he was privileged to participate in an Honor Flight to Washington D.C. in October 2015 to see the WWII memorial. Among his accomplishments, Richard served as a delegate on the Cling Peach Association Board, and was a member of both the Freestone Peach Association and Blue Diamond Almond Growers. A man of Christian faith, Richard was a member of Turlock Covenant Church, now Hope Church, where he served as Chairman of the Trustee Board, and in other areas of church ministry. Richard was preceded in death by his parents, Warner and Vera Swanson; his brothers, Elwood (Fern) Swanson and Don (Marge) Swanson; daughter, Julie Swanson; and grandson, David Hacker. He leaves behind his loving wife, Erlene, of 71 years; his daughter, Jane Hacker, and son, Timothy Swanson, both of Turlock, CA; and his three grandchildren, Paul Hacker of Fair Oaks, CA, Jason Swanson of Turlock, CA, and Kaylie Swanson of Turlock, CA. Richard also leaves behind a sister-in-law, Deloris Carlson of Kent, WA; brother-in-law, Everett (Beverly) Wenstrand of Hilmar, CA; and many beloved nieces and nephews. Richard’s family would like to give special thanks to caregivers: Leonor, Pam, and Sokhen of Covenant Care at Home, who enabled him to stay on the farm until his passing. A visitation will be held from 12:00 p.m. to 2:00 p.m., on Monday, February 07, 2022, at Turlock Funeral Home, 425 N. Soderquist Rd., Turlock. Following the visitation, a graveside service will be held at 2:00 p.m., at Turlock Memorial Park. Masks are optional. In lieu of flowers, memorial donations can be made in Richard’s honor to Mission Springs Conference Center, 1050 Lockhart Gulch Rd., Scotts Valley, CA 95066; Hope Church, 316 S. Laurel St., Turlock, CA 95380; Covenant Care at Home, 125 N. Broadway, Suite 1A, Turlock, CA 95380, or a charity of your choice.

Richard August Swanson, 95, was born in Turlock, CA on April 21, 1926, to Warner and Vera Swanson, pioneers of the Youngstown Colony of Swedish immigrants in the Turlock area. He passed away peacefully at home on Tuesday, January 18, 2022. His... View Obituary & Service Information

The family of Richard August Swanson created this Life Tributes page to make it easy to share your memories.

Richard August Swanson, 95, was born in Turlock, CA on April...

Send flowers to the Swanson family.