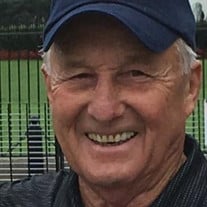 On Thursday, July 22, 2021, Robert (Bob) William Borba, loving husband and father, entered the gates of heaven at the age of 76, at home with family by his side. Bob is survived by his wife of 54 years, Janice; sons, Richard and Daniel (Carissa); and 3 grandchildren, Shelby (Scotty), Eric, and Marina. Bob was born on November 5, 1944 in Modesto, CA, to Lawrence and Virginia Borba. Bob was the second in line of five children, brothers Don, Rod, John and sister Kathie, in which he kept in close and frequent contact. Bob graduated from Turlock High in 1962 and enlisted in the Marine Reserves where he was stationed at Camp Pendleton. After active duty, he and his brother, Don, ran the Scripps Cattle Ranch in San Diego. After returning to Turlock, he married his high school sweetheart, Janice Mello, in 1966. Bob and longtime friend, Gary Linhares, founded Turlock Insurance Agency in 1969, which after a series of acquisitions, is now known as Western Valley Insurance. He was also a founding member of the Ports Auto Club. Bob formed One and Only Enterprise, a motorsports team that helped build many pulling vehicles, including his own, best known as “The One and Only” funny car that participated in tractor pulls across the United States, Hawaii, Japan and Canada. In the 70’s & 80’s, he was a member of the Heart Association and helped train thousands of residents around Stanislaus County on how to perform a new - at that time - lifesaving technique known as CPR where he earned a lifelong teaching credential. Bob was a Captain in the Turlock Rural Fire Department and was a certified EMT. Bob enjoyed family BBQ’s, motorsports, golf, fishing, SpaceX rocket launches with his sons, traveling with his wife, and telling his grandkids stories and history lessons. A Celebration of Life will be held at 2:00 p.m., on Tuesday, August 3, 2021, at Turlock Funeral Home, 425 N. Soderquist Rd., Turlock. Following the funeral, Bob will be laid to rest at Turlock Memorial Park. In lieu of flowers, please consider making a donation in the name of Robert W. Borba to Covenant Care Hospice, 125 N. Broadway, Turlock, CA 95380; or to the UCSF Foundation, P.O. Box 45339, San Francisco, CA 94145-0339, and include B1303 Neurovascular Service Fund in the memo line.

On Thursday, July 22, 2021, Robert (Bob) William Borba, loving husband and father, entered the gates of heaven at the age of 76, at home with family by his side. Bob is survived by his wife of 54 years, Janice; sons, Richard and Daniel (Carissa);... View Obituary & Service Information

The family of Robert (Bob) William Borba created this Life Tributes page to make it easy to share your memories.

Send flowers to the Borba family.