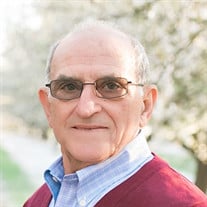 Rogerio Borba, age 81, was called to be with his Lord and Savior on Wednesday, April 13, 2022. Rogerio was born on December 20, 1940 in Norte Pequeño, São Jorge, Azores and was raised there before immigrating to California in 1969. On July 21,... View Obituary & Service Information

The family of Rogerio Borba created this Life Tributes page to make it easy to share your memories.

Rogerio Borba, age 81, was called to be with his Lord and Savior...

Send flowers to the Borba family.