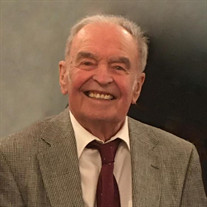 Stanley M. Corriea passed away at age 91 on December 23, 2021, in Turlock, CA. Stan was born on March 26, 1930, in Niles, CA, to Manuel and Flora Corriea. He attended Castro Valley Grammar School and was a graduate of Hayward High School’s Class of 1948, where Stan was Student Body President, as well as Senior Class President. He started working at Simons Hardware store after graduation. Stan married Norma Watts on January 7, 1951. They lived in San Leandro, Hayward, and then in Castro Valley for many years. In 1952, Stan began working as a liquor salesman for AK Thanos and then for McKesson & Robbins for over 12 years. Stan and Norma’s three daughters, Monica, Natalie, and Alison, were all born during these years. Stan was an avid outdoorsman who took many hunting trips in various states. His faith was important to him. His family was raised Catholic and his girls went to Catholic schools. In 1964, the family moved to Turlock, CA, where Stan worked for Berberian Brothers as a liquor salesman, where he won many awards. Hard work and smart investments allowed Stan to retire at age 54. During his nearly four decades of retirement, he traveled with Norma, his children, grandchildren, and other friends and relatives. “Captain” Stan and his brother-in-law Sparkey, built two houseboats which many people enjoyed. Over the years, Stan and Norma loved traveling with Sparkey, Pat, Frank, Donna, Phil, Carol, Bob, Bev, Stan Braxton and Elaine. Stan became an avid golfer, still playing right up until three weeks before his passing at age 91. There wasn’t a town he visited where he didn’t find a golf course to play. His passion for golf was shared with his sons-in-law, Tom and Tim. They played together frequently with Tim being a weekly golf buddy. Stan’s family was most important to him. When recently asked what his secret to such a long life was, he said, “My three daughters”. He never complained about his own aches and pains but always worried about others. He was always there to lend a helping hand to anyone for any project. Stan’s cheerful smile and laugh will be greatly missed by everyone. Stan was preceded in death by his wife of 66 years, Norma; his parents, Manuel and Flora Corriea; sister, Marjorie (Elmo) Miller; and brother, Milton (Pat) Corriea. Stan is survived by his loving family; daughters, Monica Corriea, Natalie (Tom) Souza, and Alison (Tim) Juif; granddaughters, Kim Hammack (Justin), Hayley (Chris) Gomez, and Ashley (Brett) Weber; and 10 great-grandchildren: Richard, Liam, Kylee (Daniel), Roger, Rowan, Dylan, Gavin, Addison, Mya, Dallas, and McKenna. A Celebration of Life will be held at 11:00 a.m. on Saturday, January 22, 2022, at Turlock Funeral Home, 425 N. Soderquist Rd., Turlock, CA.

Stanley M. Corriea passed away at age 91 on December 23, 2021, in Turlock, CA. Stan was born on March 26, 1930, in Niles, CA, to Manuel and Flora Corriea. He attended Castro Valley Grammar School and was a graduate of Hayward High School&#8217;s... View Obituary & Service Information

The family of Stanley M. Corriea created this Life Tributes page to make it easy to share your memories.

Send flowers to the Corriea family.