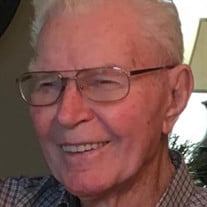 Stanley H. Olson passed away on September 13, 2021, at Emanuel Medical Center, at 98 years old. Stan was born in Turlock on December 31, 1922, to John and Hulda Olson, the youngest of four children. He attended Denair Elementary and Denair High School. At the age of 17, after his father suffered a stroke, Stan was left solely in charge of the family’s 21 acre dairy in Denair. Stan married Doris Doerksen in 1945 and had two children. They were very active in the Denair Missionary Church for many years. Around 1965, the cows were sold, and he started a 22 year career with Turlock Irrigation District. He barely slowed down following retirement, still working around the ranch and driving silage truck for a neighbor for years. Following Doris’ death, Stan reconnected with his best friend’s sister, Ethel Bergman. They were married for 44 years until her passing four and a half months ago. Stan and Ethel enjoyed traveling in their RV across the U.S. Their memorable trips included Alaska and Sweden, their homeland. Together they attended Evangelical Free Church and Cornerstone Covenant. They made their home at Covenant Living for the past eight years. The family is grateful for the wonderful care they received from the staff. Stan was preceded in death by his parents, two spouses, and three siblings. He is survived by his two children, Phyllis Manke and Ken (Bev) Olson; five grandchildren, Melodee, Mark, Steve, Brian, and Eric; and six great-grandchildren. He was extremely proud of his entire family. He will be greatly missed by all who knew him. A graveside service will be held at 10:00 a.m. on Tuesday, September 28, 2021, at Turlock Memorial Park, 575 N. Soderquist Rd., Turlock. Memorial donations may be made in Stan’s honor to Westside Ministries, at www.westsideministriesturlock.com/donate.

Stanley H. Olson passed away on September 13, 2021, at Emanuel Medical Center, at 98 years old. Stan was born in Turlock on December 31, 1922, to John and Hulda Olson, the youngest of four children. He attended Denair Elementary and Denair... View Obituary & Service Information

The family of Stanley H. Olson created this Life Tributes page to make it easy to share your memories.

Send flowers to the Olson family.