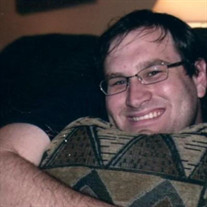 Stephan R. Mahler, 37, was a man who valued generosity, self-growth, and family. He passed away suddenly on December 6th, 2021 in Hughson, CA. Even though his time came way too soon, we who survive him will find some solace in that he will remain in our hearts forever. His family and friends remember Stephan as kind, intelligent, quiet, and loving. He had a witty sense of humor and loved to make people laugh. Not much for convention, Stephan marched to the beat of his own drum. He had a knack for cooking and feeding the people he loved was a favorite pastime. Other hobbies included reading, video games, building computers, photography, and hiking. He had an eclectic taste in music and considered it a source of pride that he was a walking encyclopedia on band history and other music lore. Stephan was born in Fresno, CA on April 27,1984. As he grew older, he spent his formative years building computers, cooking up science experiments to show his parents, backpacking with the Boy Scouts, and getting into mischief with his friends. As an adult, Stephan was well educated. He started his career working for the public library. And later, he enjoyed working in technological startups that allowed him to manage projects in various industries and to help businesses manage their data needs. He was a loving husband and son and a devoted friend. His biggest source of joy was being Daddy to Olivia, 6, and Ivy, 4. They were the center of his world and his memory will continue with his girls. Stephan is survived by his wife and children, Danielle, Olivia, and Ivy Mahler; his parents, Carl and Tammy Horner; his uncle, Victor Castro; his family in-laws Beverly Witort, John Olson, Irma Ayala-Olson, Carrie and Richard Holgate, Tony Olson and Ashley Hollis, along with a large extended family and some close friends. He was preceded in death by Marvin and Karen Smith, Ron Smith, Ron Witort, Bob and Shirley Olson, and Elise “Peaches” Olson. Services have been held privately in honor of Stephan’s wishes.

Stephan R. Mahler, 37, was a man who valued generosity, self-growth, and family. He passed away suddenly on December 6th, 2021 in Hughson, CA. Even though his time came way too soon, we who survive him will find some solace in that he will remain... View Obituary & Service Information

The family of Stephan R. Mahler created this Life Tributes page to make it easy to share your memories.

Stephan R. Mahler, 37, was a man who valued generosity, self-growth,...

Send flowers to the Mahler family.