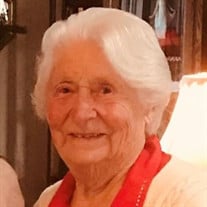 Not sure what to send?

There passed from this world on Thursday morning, a great benefactor and grand Lady known to many. In the early morning of January 6th, Vetra “Tommy” Denis passed gently away in her sleep, at her home in Stevinson, CA, at the age of 94. Tommy was born with blonde hair and blue eyes as Vetra Balentine. She was born on April 19, 1927, in Hominy, OK, to her mother Edna Amzilla Lunsford and her father Bert B. Balentine. She moved with her mother and sisters from Oklahoma early in the 1940s, to escape poverty and to find opportunity in a then-thriving California. Married on May 12, 1946, she was preceded in death by her beloved husband, Frank Benjamin Denis; himself being born on September 16, 1928, in Escalon, CA. Tommy and Frank were life-long residents of Turlock after their marriage and were prominent members of the regional business community, having creating, owned, and operated such businesses as Denis Dodge, Cal Neva Slush Company, Barrel Inn Liquors general stores, and others. They were also active in real estate development throughout California, parts of Nevada, and even Hawaii. With a deep affection toward horticulture and greenery all her life, Tommy was always very content to work in and around, and to walk among, the many gardens she created throughout her years. During the construction of the premiere Turlock entertainment center, The Divine Gardens, Tommy was instrumental in the creation and installation of all of the property’s landscaping. She was especially proud of the main fountain garden that was the centerpiece and namesake to the establishment. She traveled to many parts of the world and visited such places as Portugal, Jamaica, Costa Rica, Italy, Spain, Bermuda, Rio De Janeiro, Mexico, and more. At one point, she even spent a short time with her husband living in Hawaii part-time before eventually settling at her country home in Stevinson, where she would spend her remaining days surrounded by family. Tommy had an active, charismatic, and generous personality, which caused her to lead a vibrant and exciting life of constant activity. At the same time, she had little patience for self-pity and the “can’t” mindset. She was an avid reader and would occasionally reflect on her deep interest in school in her early years. She regretted not being able to attend school beyond the 8th grade, which was because times were very difficult after the Great Depression and during the “dust bowl” era of the 1930s. So much more can be stated about this devout Christian and strong-willed great Lady, but words can never be a substitute for fond memories. She will always be deeply missed and lovingly remembered. Tommy is survived by two of her six sisters, Clara Smith of Fresno, CA, and Gloria Becker of Hughson, CA; by her four children, Bruce Denis, Sherry Wilson (Reagan), Karen Kitchell (Mike), and Frank Denis, Jr. (Wendy); by eight of her nine grandchildren, Brett Bodine, Andrea Bodine-Edwards, Carrie Dompe, Sean Dompe, Melissa Gonsalves, Melinda Toy, Ryan Denis, and Jarrett Killough; and by many great-grandchildren, nieces, nephews, and friends. A memorial service will be held at 10:30 a.m., on Tuesday, January 25, 2022, at Turlock Funeral Home, 425 N. Soderquist Rd., Turlock.

There passed from this world on Thursday morning, a great benefactor and grand Lady known to many. In the early morning of January 6th, Vetra &#8220;Tommy&#8221; Denis passed gently away in her sleep, at her home in Stevinson, CA, at the age... View Obituary & Service Information

The family of Vetra "Tommy" Denis created this Life Tributes page to make it easy to share your memories.

There passed from this world on Thursday morning, a great benefactor...