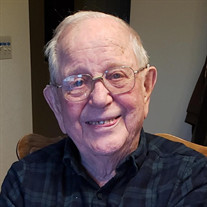 William “Bill” Blair was born April 15, 1926, and passed away peacefully on November 13, 2021. Bill was born in Hominy, Oklahoma, to Bert and Ophelia Blair, the seventh of thirteen children. After growing up in Oklahoma, Bill attended watchmaking school and learned how to repair watches. He moved to California after he received a job offer to work at a jewelry store in Chowchilla. He met his future bride, Irene, on a blind double date. They were married in 1949, had two children, and celebrated 71 years together before Irene’s passing in 2020. In 1966 Bill and Irene opened their jewelry store, Blair Jewelers, where they both worked together for 29 years, along with their two children, before closing the store and retiring in 1995. They loved traveling in their motorhome and enjoying their retired life. Bill was a member of the Turlock Masonic Lodge as well as Shriners and attended a great many of their functions and events. He lived happily in Turlock in the same house for 65 years. Bill was preceded in death by his beloved wife, Irene, his parents, and all 12 of his brothers and sisters. He is survived by his two children, Phillip Blair (Janet) and Lori Blair Harvey (Dannie), his grandchildren, Brian Blair (Marramonie) and Christine King (David), and his four great-grandchildren, Morgan, Katy, Jason, and Simon. An urn placement will be held at 1:00 p.m. on Tuesday, November 30, 2021, at Turlock Memorial Park, 575 N. Soderquist Rd., Turlock. In lieu of flowers, donations in his name may be made to Shriners Hospital for Children, 2425 Stockton Blvd., Sacramento, CA 95817 Attention: Donations Dept. Re: William Blair. Cards and remembrances may be sent to the family C/O Lori Blair Harvey, 11261 Doerksen Rd., Denair, CA 95316.

William &#8220;Bill&#8221; Blair was born April 15, 1926, and passed away peacefully on November 13, 2021. Bill was born in Hominy, Oklahoma, to Bert and Ophelia Blair, the seventh of thirteen children. After growing up in Oklahoma, Bill attended... View Obituary & Service Information

The family of William Edward Blair created this Life Tributes page to make it easy to share your memories.

Send flowers to the Blair family.