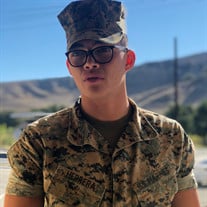 With deep sadness we would like to share the passing of our beloved son, Xavier Michael Herrera, age 22, on Wednesday, March 2, 2022, in Oceanside, California. Xavier was born on November 28, 1999, at Langley AFB in Hampton, Virginia. He grew up in many states, but San Diego, California was where he spent most of his life. However, he considered Visalia home where his mom and dad lived. He attended Challenger Middle School, Mira Mesa High School, and graduated from Redwood High School in 2017. Xavier was always an avid athlete and spent much of his time in the gym. Xavier started riding his bike without training wheels at the age of 2 which led him to BMX racing with his uncle for many years. Throughout high school he played baseball and football, and he could always be seen dancing on the sidelines. At the age of 17, Xavier enlisted in the United States Marine Corps. He continued his love of sports and the gym into the Corps. He played football for the Camp Pendleton Dragons, softball at MCRD, and completed his black belt in Marine Corps Martial Arts which led him to becoming an MCMAP Instructor. He was a Marine to the core and did two deployments before he could even legally buy a beer. Xavier loved his girls Chantel, his dog Samantha, and his Challenger Selena. He learned quickly how to be a motor head and was always doing performance modifications to his newly acquired hot rod. He lived by the motto “Muscle Cars Are Built Not Bought” and “Mopar or No Car.” Xavier always enjoyed swinging home for a long weekend to hang out with his family, harass his siblings, wrench on his car, or pawn off the grand puppy. X was the life of a party and always knew how to light up the room and make everyone laugh. Even if he pushed your buttons, he was the guy you loved and couldn’t get mad at. He touched so many lives throughout his short 22 years and will continue to live on in our hearts and never be forgotten. Xavier is preceded in death by his Yaya, Maria Labuga. They had an incredible bond, and we know the two of them are together catching up where they left off. Xavier is survived by his soulmate Chantel Reyes Villareal; his parents, Christopher & Trinity Warminski, Michael Herrera (Jamie); and his siblings, grandparents, and many aunts, uncles, cousins, friends and fellow Marines. A visitation will be held on Wednesday, March 23, 2022, from 4:00 – 6:00 p.m. at Turlock Funeral Home, 425 N. Soderquist Rd., Turlock. A Rosary will be held on Wednesday, March 23, 2022, at 6:00 p.m. at Turlock Funeral Home, 425 N. Soderquist Rd., Turlock. A funeral service will be held on Thursday, March 24, 2022, at 10:00 a.m. at Turlock Funeral Home, 425 N. Soderquist Rd., Turlock. A burial service will be held on Thursday, March 24, 2022, at 12:30 p.m. at Winton Cemetery District, 7651 Almond Ave., Winton.

With deep sadness we would like to share the passing of our beloved son, Xavier Michael Herrera, age 22, on Wednesday, March 2, 2022, in Oceanside, California. Xavier was born on November 28, 1999, at Langley AFB in Hampton, Virginia. He grew... View Obituary & Service Information

The family of Xavier Michael Herrera created this Life Tributes page to make it easy to share your memories.

Send flowers to the Herrera family.