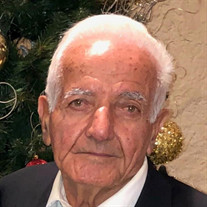 Yonatan Davoodi of San Jose, CA, was a beloved husband, father, grandfather, and friend to many during his incredible 79 years of life. He passed away at Valley Medical Hospital on Friday, December 10, 2021, surrounded by his family. Yonatan was a kind, funny, and caring man who will be deeply missed by all who were lucky enough to know him. For the past 51 years, he has been the devoted husband of Julieh Aslani. Yonatan was born in Aliabad, Urmia, Iran, on October 23, 1942, to the late Eramieh Davoodi and Nanajan Muroni. He was employed for more than 20 years at a telecommunication company in Iran, and he was an avid volleyball player during his time off. He loved spending time with his grandchildren and family. When not with his family, he could be found taking long walks around San Jose, socializing with friends, gardening, watching sports, and shopping for the best deals at local grocery stores. Besides his wife, he is survived by his three children, Khenanieh Davoodi and his wife Maria of Connecticut, Ramsin Davoodi of California, and Monika Davoodi of California, as well as four grandchildren, Natalie, Abegail, Demeil, and Danita Davoodi. He is survived by his beloved sisters Jeneh and Juane Davoodi of Iran. He is also survived by many cousins, nieces, nephews, aunts, uncles, and friends. Besides his parents, he was predeceased by his brother, Yoav Davoodi. A funeral service, with a burial following at Turlock Memorial Park, will be held on Monday, December 20, 2021, at 11:00 AM, at Turlock Funeral Home, 425 N. Soderquist Road, Turlock, CA 95381. A luncheon for family and friends will follow the funeral service at the Assyrian Civic Club.

Yonatan Davoodi of San Jose, CA, was a beloved husband, father, grandfather, and friend to many during his incredible 79 years of life. He passed away at Valley Medical Hospital on Friday, December 10, 2021, surrounded by his family. Yonatan... View Obituary & Service Information

The family of Yonatan Davoodi created this Life Tributes page to make it easy to share your memories.

Send flowers to the Davoodi family.