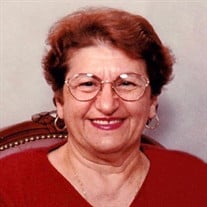 Zina Piro was born in Russia on February 20, 1938 to Khoshaba Arbo and Lidia Bebley Arbo. Zina had 6 siblings: Rose, Vardeh, Sabri, Paul, Edward and Shamerin. Her sister Vardeh passed away on August 5, 2017. Zina and her family fled from Russia to Iran in 1938 due to political unrest. In 1953, at the age of 15 years-old, Zina married Pirou “Pierka” Piro. She had four children: George, Ramson, and twins Romeo and Ramin. Zina became a widow when her husband, Pirou, passed away on February 26, 1966. Moving forward, she was determined to provide a better future and life for her children. On February 10, 1972, Zina and her four boys moved from Iran to Yonkers, New York. There, Zina worked for Super X Computer Company as an electronic assembler. Zina and her children eventually chose Turlock, California as their home in October of 1978. She worked at Brandel Manor as a dietary cook for over 10 years until her retirement. Her day-to-day life as a single mother involved managing numerous tasks; she was a provider, homemaker, and above all, a nurturing and loving parent. Zina gave Heaven her eldest son, George, on March 4, 2011. She is survived by her three sons and their respective families: Ramson, Helen, Lauren and Nathaniel; Romeo, Ardemis, London and Presley; Ramin, Vivian and Roman, as well as her daughter-in-law, Mary. Zina leaves behind her cherished sister-in-law, Dariko Pirouti. She also leaves behind Amy Bublak, whom she embraced as a daughter for over 35 years. Zina’s essence and deepest love was her children, grandchildren, siblings, nieces, nephews, extended family and friends. Zina exemplified the true meaning of family. She enjoyed her life by raising her sons and by surrounding herself with loved not only for all holidays and special occasions, but for each and every day. She loved cooking, baking, sewing, crafting jewelry, and occasionally visiting the casino. Zina knew no strangers and genuinely welcomed everyone with open arms into her home. Her earthly journey came to a peaceful transition to Heaven on July 10th of this year. Zina was surrounded by all of her family as angels guided her to our Heavenly Father. She is now with her parents, son, George, sister, Vardeh, and other cherished family members and loved-ones. A woman of faith, she was a devoted member of the Assyrian Church of the East – Mar Addai Parish. A funeral service was held for her on Friday, July 16th. Following the funeral, Zina was laid to rest at Turlock Memorial Park, 575 N. Soderquist Rd., Turlock. A third day memorial breakfast will be held after Mass on Sunday, July 18th at Larsa Banquet Hall, 2107 E. Monte Vista Ave., Denair. In lieu of flowers, memorial donations can be made in Zina’s honor to Mar Addai Parish, P.O. Box 3216, Turlock, CA 95381.

Zina Piro was born in Russia on February 20, 1938 to Khoshaba Arbo and Lidia Bebley Arbo. Zina had 6 siblings: Rose, Vardeh, Sabri, Paul, Edward and Shamerin. Her sister Vardeh passed away on August 5, 2017. Zina and her family fled from Russia... View Obituary & Service Information

The family of Zina Piro created this Life Tributes page to make it easy to share your memories.

Send flowers to the Piro family.